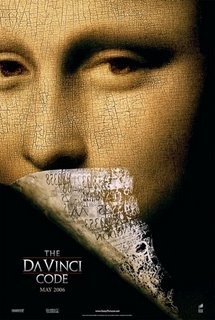 It seems to me that if you have a product to sell these days that has something to do, even vaguely, with the Holy Grail, that your numbers have been pretty much in the black for a while, and will continue to remain on that side of the ledger. Just yesterday, for instance, I picked up Piers Paul Read's book The Templars in preparation for the onslaught of Grail talk that will continue to engulf us for a while. The publication of Dan Brown's The Da Vinci Code in 2003 has sparked an interest in this medieval topic, and has already propelled at least one successful legitimate spoof (Monty Python's Spamalot) that lends a welcome respite from all the serious medieval and conspiratorial plots and subplots that we currently seems to crave. Now with the worldwide release of the film The Da Vinci Code, which opened on May 19, we are back on track, once again submerged in the thick of all things conspiratorial and ecclesiastical, getting lost in both, and not being able to tell one thing from the other, which is the main goal of this new movie.

It is the first blockbuster of the summer, and it will do marvelously at the box-office. Most certainly, every other film this summer will have to compare itself to this one in box-office receipts, and I think that they will all fall short. This bonanza will be further sparked by all the talk-show banter about what the film is advocating, by the recent ruling in favor of Dan Brown in the British courts, and by the recent attacks against the movie by The Vatican, who is spending as much money to denigrate the film as Columbia Pictures is shelling out bucks to promote it.

Now to divulge some deep-seeded secrets that will no doubt stand your hair on end: If I told you that Jesus married Mary Magdalene would you believe me? If I told you that I saw this movie in sleepy and that actor Harvey Fierstein was sitting right in front of me (with a woman!) would you think I had some kind of hidden agenda to report? "There are things in Heaven and Earth, Horatio..." let's just leave it at that.

What director Ron Howard has managed to do in his adaptation of the novel is to turn a juggernaut page-turner into a 148 minute boring day at the museum. Novel adaptations are always fun. The masterful ones (A Clockwork Orange, The Godfather) show us hidden potential that the work merely hinted at on the printed page. The truly awful ones like The Bonfire of the Vanities (also starring Tom Hanks) magnify the original work's deficiencies to the point where the once faithful public now begins to question the integrity of the original source.

Tom Hanks with his long locks, which don't look too bad on him, goes through the film with the same quizzical smirk on his face. Also, early on in the film, Mr. Hanks delivers a line from the script that contains a factual mistake concerning the garb penitents (not priests) wear during Holy Week in , and this destroys for me the cinematic character of Robert Langdon right from the outset. A Harvard professor would not make this kind of error. Audrey Tautou plays it much too quiet and insignificant considering the secret that she carries, and Paul Bettany is much too pretty and not threatening enough physically as the deranged monk Silas. This is Paul's second film for Ron Howard where he plays a ghost either literally or figuratively. Jean Reno is not too effective as a French policeman. He was a lot more successful playing Gendarme Gilbert Ponton in this year's The Pink Panther than playing a legitimate cop in this film. The only one who survives this movie is Ian McKellen. That twinkle in his eye, and the way he caresses every line assures us that he knows exactly that all of this is dribble. By not approaching it with any kind of seriousness at all, he makes us believe that he is the most serious performer in the entire cast. Bravo Sir Ian for making the two hours plus duration of this film bearable!

It's not that I hated The Da Vinci Code, it's just that I think it could have been trimmed down, speeded up, and it would have made a better film. This is the kind of story that needs 's smoke and mirrors in order to work. You need to fool the people into believing your side of the story. If you go slowly into it, you end up possibly exposing all the tricks, and the illusion is lost. This is the problem with Ron Howard's movie: it takes the subject matter way too seriously, and approaches it the same way you would a ponderous medieval tome. It's just a novel! It's just a movie! Entertain, don't preach!

it's just fiction to enjoy, like a policial, suspense book.
nowadays people have to hold on something to cover their spiritual hole.
sorry my english.