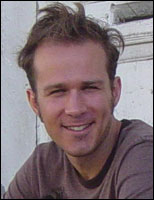 The sea. Has there been a greater source of inspiration for composers than the enormous expanse of saline water that makes up the majority of our planet? Maurice Ravel (Une barque sur l'océan) Claude Debussy (La Mer) and Richard Wagner (Der fliegende Holländer) were fascinated by it, were fearful of it, and their music depicting the sounds and the furies of the ocean probably ranks among their most evocative.

Raymond Lustig, the young American composer and doctoral student at The Juilliard School is following this watery tradition. His You Catching? is a tone poem with narration which has as its central theme the depiction of the sea, and the eternal but fleeting hope of one day catching the big one -- or at least, lots of little ones. It was performed at a New York space called The Stone as part of a CD pre-release concert.

Structurally written so that it reminds this listener of Aaron Copland's A Lincoln Portrait, Lustig's work, like Copland's, is totally American in its subject matter and, also like Copland's, it celebrates democratic ideals that are inately American. The text, adapted by Ana Berlin, from weekly reports from a Montauk fishing maven, speaks to anyone who has ever cast a line and hoped and prayed for something to bite. At the same time, it should also speak to anyone who has ever attempted the impossible. It is a very romantic work in this respect, although its musical language is decidedly post-romantic, clearly rooted in late 19th and early 20th century chromaticism, but also in tune with the contemporary language of composition. In You Catching? Ray Lustig, as a composer, is definitely ready to take you on a journey to the edge, but don't worry, unlike many of his peers, he knows how to find the way back. Oh, and by the way: you are going to have fun doing it.

You can hear You Catching? on Avian Music. For more information about this composition you can visit avianmusic.com.
Posted by Vincent Vargas at 11:03 PM