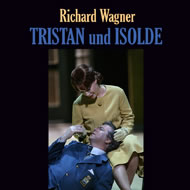 There have been a lot of changes since the last time that I heard this production of Tristan und Isolde, which premiered last year at the Festspielhaus. First, the conductor of the original performances, Eiji Oue, was replaced after very negative critical reviews as well as heavy booing from the festival audiences. Honestly, I really did not think that he had done a bad job at all. The worse that could be said about him was that he led a boring reading of the score, and given the very boring production by director Christoph Marthaler, that had been handed to him, I thought that the two went hand in hand. Nonetheless, Mr. Oue was replaced by Peter Schneider who conducted last year's production of Lohengrin at Bayreuth, and who also subbed for James Levine this year at the MET for three performances of Parsifal.

Andreas Schmidt, who sang Kurwenal last year was replaced by Harmut Welker. This was a good change, but I can't say that Mr. Welker was that much of an improvement. There were more than a few rocky spots in his performance, and the voice seemed shaky and unsure of pitch throughout the performance.

Nina Stemme, Robert Dean Smith, Petra Lang, and Kwangchul Youn all came back to reprise their original roles from last year. Ms. Stemme is one of our most able Isoldes: the voice is strong, steady, voluminous and a pleasure to listen to. Mr. Smith has improved quite a lot since the premiere of this production. This time around, his Tristan sounded steadier and he was able to pace himself much better. As a result, he was able to carry the third act with no vocal mishaps, although you can hear that the voice was getting close to the breaking point. Both Ms. Lang and Mr. Youn (who is a really busy beaver these days at the Festival) ably sang their respective roles. Peter Schneider led an expressive reading of this lush score, but certainly not a memorable interpretation.
Posted by Vincent Vargas at 12:07 PM

What a great Wagner website you have. I used to have a box at the Met. I have, sadly, turned my back on them since they replaced Peter Allen with Margaret Juntwait, who sounds much like an anonymous voice on an airport PA system. Your news that MetOpera is their new handle really does distance The Met from its old NYC roots. Good luck to them, but they will realize that if they insist on fixing what's not broken (at least to those of us who grew up with The Met and whose grandfathers, fathers and husbands belonged to the Metropolitan Opera Club), they will wind up with no audience at all. They cannot Baz Luhrmann the place without some repercussions.

I went to Nightingale in NYC and know all those schools, so I know you are educating great kids. I hope they realize how lucky they are to have you for a teacher!