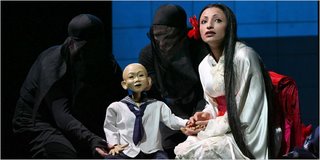 The Metropolitan Opera's new season opened with a production of Giacomo Puccini's Madama Butterfly. This is the first new production of the first year under the new regime headed by Peter Gelb, who promises to bring back to the MET that long lost spark of theatrical excitement and critical praise that has been absent for many a season in America's most important opera house. I will be attending this production on October 21st and will be writing my own review of this production, directed by Anthony Minguella, at that time. For now, here are excerpts from Anthony Tommasini's review in the New York Times.

In the aisles and lobbies during the second intermission of the Metropolitan Opera's new production of Puccini’s “Madama Butterfly,” which opened the season on Monday night before a star-studded audience, patrons could be overheard heatedly debating the puppet used to portray Butterfly’s little boy.

This nonspeaking minor character is typically played by a cute child in a sailor suit. In this production the director Anthony Minguella has introduced a small puppet boy manipulated by three puppeteers cloaked in black who stand behind him. The child moves with eerily human gestures, and his baldish head has a wizened, hopeful yet anxious look.

Some people thought it was “more real than any real child they could have had,” as one patron put it. Others thought it was intriguing but very strange. Somewhere in the house, Peter Gelb, the new general manager of the Met, must have been beaming.

This is exactly what he had hoped for in bringing to the Met the “Butterfly” production that Mr. Minghella, the Oscar-winning film director, originated at the English National Opera in London. It was a major statement for Mr. Gelb to inaugurate his tenure with this production at a time of diminishing audiences at the house and great challenges to the art form. The Met, of all companies, should present innovative, risk-taking work that challenges audiences, generates interest, gets people talking and, most important, keeps people coming.

ou cannot call Mr. Minghella’s concept a modernized staging because the elaborate costumes by Han Feng, filled with stylized flourishes, are meant to evoke the opera’s setting, Nagasaki at the beginning of the 20th century. The sets by Michael Levine have an abstract look, with dull black side walls and glossy black steps, rectangular shapes of radiant reds and greens, sliding panels deftly used to make characters disappear, and a slanted overhead mirror that hauntingly reflects the action onstage.

The captivating imagery of the production is sure to be its least controversial element. At the end of Act I, for example, during the wedding-night love duet between Butterfly and Pinkerton, black-clad dancers form trellises of white lanterns to shield the couple as flower petals fall from on high, and curtains made from strings of petals descend. The use of puppets may be the production’s most debated element. But the image of this puppet child, with his fixed stare and need to know, will stay with me.

Mr. Minghella’s courageous Butterfly was the Chilean soprano Cristina Gallardo-Domâs. A slight-framed and intense woman, she had a riveting presence. She does not have a conventionally lovely voice; her sound is earthy and sometimes a touch strident. To shape supple phrases, she thins her sound and sings with impressive delicacy, though with some loss of richness. And she has a wobbly vibrato in full-voiced top notes. Yet she gave a vulnerable, utterly honest and, in its way, elegant performance.

Pinkerton was played by the Italian tenor Marcello Giordani, who looked a little beefy to play the dashing American Naval officer. Still, he sang with full-bodied Italianate passion; warm, rich tone; and clarion top notes. And I have never seen him act with more involvement and subtlety. As Sharpless, the robust baritone Dwayne Croft was powerless to stop Pinkerton from his callous courtship of the trusting geisha Butterfly. The fine mezzo-soprano Maria Zifchak was an unusually impassioned Suzuki, Butterfly’s devoted servant.

James Levine, in his first performance at the Met since having lost four months of work to a shoulder injury, received a tumultuous ovation when he arrived in the pit. If Mr. Gelb is going to take creative chances and lure directors from the film and theater to the Met, he will need more than ever the solid musical grounding Mr. Levine has long brought to the house.

Conducting his first complete “Butterfly” there, Mr. Levine had this familiar score sounding vigorous, lean and intricate. He was attuned to the modernistic touches of Puccini’s harmonies and to the arching lyricism of Puccini’s lines.

Whatever your take on this production, it is sure to be a hot ticket. Everyone will be talking about the Met. When was the last time you could say that?

Posted by Vincent Vargas at 5:19 PM