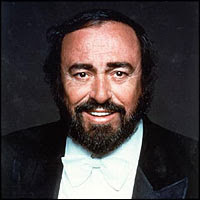 We didn't realize it then, but those days were a true golden age of opera, and Luciano Pavarotti was one of its brightest stars.
Posted by Vincent Vargas at 5:18 PM

I did want to comment about one thing you had said...I do believe that Nilsson had a great tenor to match her....it was Franco Corelli.

His voice was huge and his recording of Turandot with Nilsson is wonderful.....you may want to check it out, that is, if you have not already heard it.