The Title is "Cloverfield" 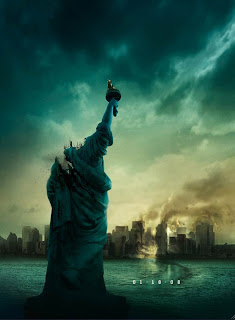 Cloverfield aims to be a really scary movie and it succeeds rather affectively. Critics who have labeled it "Godzilla meets The Blair Witch Project" are right on the money. It's more like a demented game of Doom where the monsters go mostly unseen, making the stakes even more critical since you really don't have any adequate weapons to protect yourself with.

The ride's the thing in this movie, and if you can survive the motion sickness that the first person point-of-view camera technique can induce, then you are going to have some good scary fun. Never mind that it is a 9/11 film in disguise, where the Islamist enemy has been turned into a giant hideous mutation harboring sleeper cells that jump out of nowhere and attack without warning. Go with it and don't look back. Also. don't over think this odd transformation. The attacks on September 11 were infused with a religious agenda that would be box-office death. Besides, turning the 9/11 attackers into horror movie monsters feels comforting and it is not that peculiar. America has always been scared of dealing with religion directly. According to art critic and historian Robert Hughes, long ago we pulled Christ down from his cross and transformed him into the Easter bunny just to make that Christian holy day feasible for children as well as adults.

Ultimately, despite its complex inner issues and subtext, the movie ends up being much ado about nothing, and the downbeat ending does little better than provide us with hopeless hope. I looked for hidden symbolism in the film's title, even considering that a song from the band Wolfmother might shed some light on the mystery. As I suspected, I couldn't have been further from the right path. Here, in the words of director Matt Reeves, is the reason why the film is named Cloverfield:

"When we started the project there was going to be an announcement in the trades. In this case, they wanted to keep everything under wraps. So the movie was going to be made under this outside corporation that was basically a property of Paramount. That corporation had a name that I don’t know the name of. I think Clover was the first part of it. Maybe it was Cloverdale. When Drew (Drew Goddard writer of Cloverfield and Lost writer)was putting a name to the project, there was supposed to be a name for the project like there was for The Manhattan Project. So he said, "I am going to use that weird mysterious thing," and he misheard it. He didn’t even understand that it wasn’t Cloverfield, it was Cloverdale. Maybe that was because of the street by J.J.’s (J.J. Abrams: producer of Cloverfield and Lost) old office, but the truth is he just misunderstood it."

Enjoy Cloverfield, and remember: while you're watching it don't think!
Posted by Vincent Vargas at 11:45 PM