In the Heights heading for Tony Glory 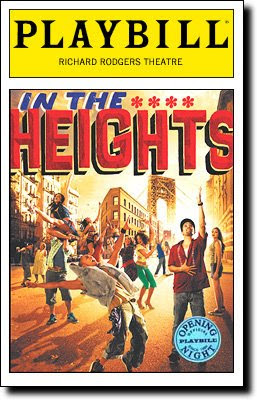 You don't have to be Latino to enjoy In the Heights, but it definitely helps. The salsa driven, hip hop-infused musical by Broadway newcomers Lin-Manuel Miranda and Quiara Alegría Hudes about Washington Heights is selling out every night at the Richard Rodgers Theater thanks to its infectious score, feel-good story and lovable characters. Further, in a weak year for new shows this work is well on its way to winning the Tony Award for best musical of the season.

Washington Heights has always been a neighborhood in transition. The area has been home to Jewish and Irish communities over the years, but it is the current Latino residents of the neighborhood, in particular the Dominican enclave, that sets the tone as well as the beat for Mr. Miranda's very likable musical.

Any art work which is based on a particular geographical place mythologizes its terrain. Benjamin Britten transformed Aldeburgh, on the coast of Suffolk, England into his opera Peter Grimes, and Spike Lee forever changed our perception of "da hood" in his film Do the Right Thing. As portrayed in this musical (which at times feels very close in spirit to Spike Lee's film) this is a Washington Heights of the mind and of the heart. A neighborhood filled with patience and hope where there is never any mention of drugs, crime, urban blight or HIV. The NYPD doesn't even show up in this story! You might argue that it is, after all, a musical and that matters ought not to get that serious. I would argue back that in West Side Story, that landmark musical about the tough gritty New York streets, there is a sardonic song dedicated to a police officer, and that when bloody violence erupts it is to the tune of some of the greatest music ever written for the American stage. But is is unfair to compare these two musicals -- absurd, really.

In the Heights borrows from many urban artistic elements and manages to lay down a very convincing geography populated with some stereotypical, yet lovable characters, and it accomplishes this very well. Among the recognizable barrio types are the matriarch grandmother, the gossipy hairdresser, and the lovable bodega owner. The only stock characters missing are the domino-playing Greek chorus. But, who knows, they might be waiting around in the wings in case the show develops a sequel at some future point in time.

Despite all its faults, In the Heights is not a dreary experience whatsoever, quite the opposite: its Latin beat suffused with more than a dash of hip hop makes it a toe-tapping, head-bobbing evening. Even actor Billy Crystal, who was sitting in the row in front of me, stood up at the end to give the show a standing ovation.

Giving excellent performances are Olga Merediz as Abuela Claudia, Robin de Jesús as Sonny, and Priscilla Lopez (Diana in the original production of A Chorus Line) as Camila. It is a true ensemble musical, and the entire cast is quite energetic and they work well together.

At the center of it all, Lin-Manuel Miranda is the glue that keeps it all together. It is his show, his conception, and he stands out above the rest of the performers. The rest of the cast sings and dances boleros, sons, and merengues, but Mr. Miranda raps, and although his rhymes, lyrics and music lack the subtlety and flair that once made Broadway unique, his whole-hearted belief in his little show and his incredible energy wins us over to his side.

In the Heights might not reach the stratosphere that it aims for, but it does offer an entertaining night at the theater.
Posted by Vincent Vargas at 11:16 PM