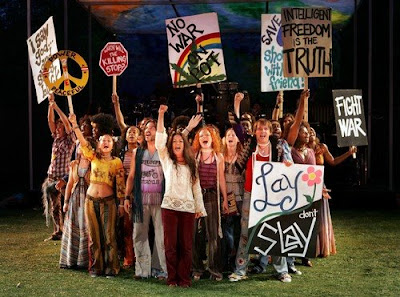 The Public Theater is ending its summer Shakespare in the Park season at the Delacorte Theater with an awesome production of one of their own creations: 1967's Hair. Billed as the "American Tribal Love Rock Musical," Hair was the first show mounted by producer Joseph Papp after he bought the old Astor Library on Lafayette Street and converted it into The Public Theater. In 1968, the musical moved to Broadway (featuring such unknowns at the time as Ben Vereen, Melba Moore, and Diane Keaton), where it played a smash run of 1, 750 performances, was a critical and popular hit, and forever changed the landscape of the American musical.

Hair is a landmark work. When you consider some of the other offerings of the Great White Way at that time: Fiddler on the Roof, George M, and Zorba, the tribe of hippies that landed at the Biltmore Theatre must have looked to the average theater-goer of that time like an invasion from another planet. But make no mistake about it, Hair accomplished many things that no other musical had even attempted. It was one of the first to use rock as the musical idiom of choice, it featured a racially integrated cast, it called for young people to use drugs, rebel against society and adopt as a lifestyle all aspects of the sexual and drug revolution that characterize the 1960's.

This musical is the spiritual granddaddy of many successful shows that could not have been created had Hair not paved the way for them. A Chorus Line (a show that also began its life at the Public), Rent, and Spring Awakening are three works that come to mind immediately.

This production at the Delacorte is Hair's first major New York production since its initial run. This revival shares a powerful link with the original production. Not only is it a Public Theater production, but the work's inherent anti-war message speaks very clearly to us in our post 9/11 world.

Removed from its time, but with a clear voice for a new generation, the show might look a bit too manicured and polished for my taste. I remember the 1960's as a bit more gritty. Still, the young cast is a joy to see, and the energy level is so high that their enthusiasm becomes infectious. All the old songs are there: the great classics like "Aquarius" and "Good Morning, Starshine," as well as the sillier ones like "Frank Mills," which I have always argued is the most curious song ever written for a Broadway musical.

Hair saves its most powerful moments for the end. The closing moments of this work are some of the most powerful I have seen in quite a while, and this production manages a memorable coup de théâtre with the song "Let the Sunshine In." I dare anyone not to be moved, enthralled, and even angered during the closing bars of this score.

This production is so wonderfully polished, though, that I hope there is a future for it on Broadway. Come award time, I can even see it winning best revival, even though the original production was not even nominated for any Tony award. Will it come to Broadway? Well, let's just say that if there is a Republican win in November, then we really need this production of Hair, with its message of love and peace, to come to Broadway immediately to rescue us.

Posted by Vincent Vargas at 2:46 PM

I absolutely loved this blog. What a great job you're doing! I'll be coming back to your site.

Sorry, I didn't mean to be "anonymous", not that I have anything to hide :)

Thanks for your comment. I hope that you keep on reading it in the future. Your blog seems to be private, but I hope that one day I will be able to read it.

Sure. I will keep coming back. And you know what? I made my blog private right after reading yours. :) It used to be public, but it looked so ridiculous compared to yours that I almost delete the whole thing! No kidding.

Well, I wouldn't delete it. I am sure that it is good, and that you have readers.