Doctor Atomic premieres at the MET 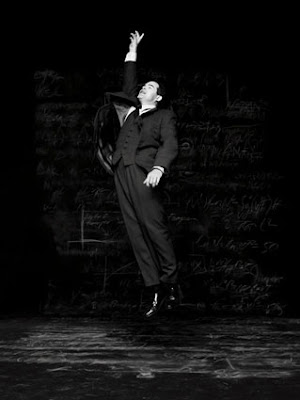 Doctor Atomic is the third major work for the operatic stage by composer John Adams. It was given its world premiere at the San Francisco Opera in 2005 in a production by its librettist, Peter Sellars. Since then that production, which revolves around J. Robert Oppenheimer, the Manhattan Project, and the first detonation of an atomic bomb, has been performed at Lyric Opera of Chicago and in Amsterdam. On Monday, Doctor Atomic came to the Metropolitan Opera for the first time in a whole new production staged by Penny Woolcock.

Twenty years ago I attended one of the performances of Nixon in China at the Brooklyn Academy of Music. John Adams's first work for the operatic stage was a landmark late 20th century production, and it catapulted this composer to the forefront of the operatic world. Minimalism is still the driving style of this work, but don't expect the easy chord progressions and consonance that made Nixon in China so appealing. Doctor Atomic is a mature work. and Adams's music now features more dissonances and complex rhythms than ever before. Also, the opera is filled with instances of electronic sounds as well as recorded rumbling effects that were so powerful that they gave the impression that they were dangerously shaking the very foundations of the opera house.

If at times Doctor Atomic appears to be a bit episodic and disjointed, the culprit might just be Peter Sellars's libretto which is made up of memoirs, letters, and transcripts of conversations (which recently became declassified) of the actual members of the Trinity project at Los Alamos. Adding further distance, Sellars also weaved into the libretto poems by John Donne, Muriel Rukeyser and Charles Baudelaire. The first act ends with Oppenheimer singing an aria whose words are adapted from John Donne's Holy Sonnet XIV "Batter my heart, three person'd God." It ends up being the most moving and memorable part of the entire evening. In the second act there is an amazing choral number based on the text of the Bhagavad Gita (which Oppenheimer could read in its original Sanskrit), where the wrath of the god Vishnu, the preserver of the universe, is invoked as the minutes tick down to the first nuclear blast.

Many of the singers at Monday's premiere were reprising their roles from the San Francisco world premiere. These include Gerald Finley as Oppenheimer, Richard Paul Fink as Edward Teller, and Eric Owens as General Leslie Groves. All of them gave wonderful performances. Gerald Finley was in astonishingly good voice on Monday, and his portrayal brought out all the complexities, doubts and fears of J. Robert Oppenheimer.

The production by Penny Woolcock, with sets by Julian Crouch, sets the action on a unit stage of compartmentalized niches, flying debris and white sheets which are suspended on wires to form New Mexico's Oscura Mountains. For most of the evening, the bomb, which is a gray iron orb covered with a maze of dangerous looking wires, hovers above the action like a malignant moon.

Doctor Atomic is not an easy evening at the opera, and if you don't like modern music, you should stay far away. But if you are interested in operatic theater that attempts to broaden the horizons of the art form, then make sure that you catch the remaining performances of this important new production.
Posted by Vincent Vargas at 9:21 PM