Waiting for Godot is back on Broadway 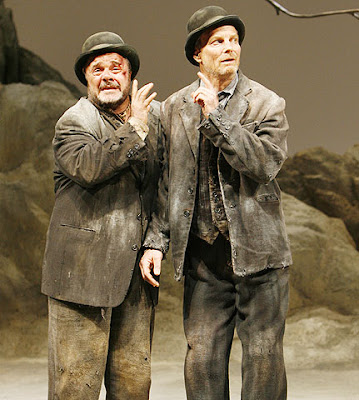 The Roundabout Theatre Company has a hit on their hands with a superb production of Samuel Beckett's masterpiece Waiting for Godot played by a cast of superb quality. In the roles of the two existential vagabonds, Estragon and Vladimir, Nathan Lane and Bill Irwin are joined by John Goodman and John Glover in the supporting roles of Pozzo and Lucky. As was reported by UPI back in December, the role of Lucky was originally to have been played by David Strathairn, whom many will remember as the Academy Award nominated actor who played CBS reporter Edward R. Murrow in the film Good Night, And Good Luck. When Mr. Strathairn dropped out, John Glover joined the cast.

Waiting for Godot is the beginning of modern theater. The play is the precursor of the "theatre of the absurd" movement, and Eugene Ionesco, Harold Pinter, Edward Albee and David Mamet are all its children. I am sure that at the time of its writing, the author never imagined how influential his work would be. Written against the background of Post-World War II Europe, and the ever-present threat of nuclear holocaust, his carefully crafted skeletal play (first published in French in 1953, then translated by the author into English) dramatizes the trivialities of everyday life, while never for a moment being trivial. It caused a literary revolution as the work's non-plot oftentimes appears to be nothing more than a string of glorified vaudeville numbers. Through his cast of comic clowns (based largely on the great Hollywood comedians of the silent era) Beckett explores the loneliness of modern Man in an apocalyptic godless world. And yet, this serious intent is cleverly disguised in two enigmatic acts filled with comic possibilities, but which never quite seem able to get started. A critic of the time wrote that Beckett "had achieved a theoretical impossibility—a play in which nothing happens, that yet keeps audiences glued to their seats. What's more, since the second act is a subtly different reprise of the first, he has written a play in which nothing happens, twice."

This production of Waiting for Godot manages to strike all the principal chords that any staging of this work must have. In the first place, it is funny, and every successful Godot production must cut through the seriousness and attack the funny bone. This is not hard to do when you have Nathan Lane, Bill Irwin, and John Goodman on board. Each is hilarious, but each is also heartbreaking. This is the other requirement for the play: it must indulge our sense of tragedy. A perfect example of the comic and the tragic is found in John Glover's Lucky, who easily evokes our pity as a creature resembling more a beast of burden than a man, but who can also make us roar with his reading of the nonsensical Act I monologue.

It is interesting to note that right now in London a production of Godot, featuring Ian McKellen, Patrick Stewart, Simon Callow, and Ronald Pickup is enjoying a sold-out run at Theatre Royal, Haymarket. Not having seen it, I cannot comment on it, but one thing is for sure: given that illustrious British cast, it must be a wonderful but wildly different take on Beckett's play.

The New York production is also rapidly selling out. At this point there are very few seats left for this limited run. Make a dash to Studio 54 fast, and don't miss this genuine theatrical event.
Posted by Vincent Vargas at 7:28 PM