RED on Broadway at the Golden Theatre 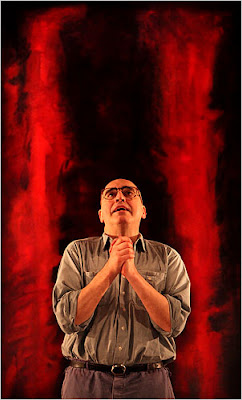 The Donmar Warehouse, that magnificent British theatrical institution, is on a roll these days. Recently, three of their productions (Frost/Nixon, Mary Stuart, and Hamlet) have successfully made it to New York City after sold-out runs in London. Donmar’s latest offering is Red, written by John Logan, (who wrote the screenplay to the films Gladiator and The Aviator) and directed by Michael Grandage: a two-man play centering on the relationship between American painter Mark Rothko and his studio assistant during the time when the artist was awarded a commission to paint murals for the newly-built restaurant The Four Seasons. This stormy period of the artist’s life is brought to life by actors Alfred Molina and Eddie Redmayne, who respectively play the tempestuous Rothko and his young inexperienced studio assistant.

When you enter the Golden Theatre, the first thing that hits you is the smell of paints and linseed oil. Set designer Christopher Oram has created a hyper-realistic environment that looks and smells like a working artist studio. Then, when you settle in your seat you instantly become aware that already sitting on the curtain less stage, his back to us, is Molina, his hand cradling his shaved bald head. He sits there, already being Rothko, looking hard and deep at one of his “red” paintings that hangs on a pulley-system easel upstage. I had not seen this theatrical conceit of having the lead actor already there before the audience arrives since Ian McKellen sat on a wheelchair as old Salieri in the original production of Amadeus. As he sits there, in silent communion with his work for what seems like an eternity, already in character, he is preparing us for a play which is essentially about probing, about looking deeply past the obvious surfaces and into the pulsating heart and soul of a piece of art. When the house light go down, Rothko lights a cigarette, stands up from his chair and approaches the painting. He extends his hand and touches the stretched canvas in front of him, feeling its delicate surface -- the creator in search of his creation's hidden truth and secrets... perhaps its soul. It is a magical theatrical moment, and the first line of the play has not even been uttered.

The first words I ever heard about Mark Rothko, indeed, the first time I ever heard of the man I was an undergraduate at NYU. Rothko was dead less than ten years, and my best friend was taking an Art 101 course. He was puzzled by his professor's statement about Rothko's work. "His paintings carry the weight of the Old Testament" the professor lectured to the class. The words resonated within me, but my knowledge of art at the time did not allow me to understand the reason anybody would utter such a statement about abstract colors on a canvas. I dismissed the comment as ridiculous, but for some reason the memory of it stayed with me. That summer, the Metropolitan Museum of Art held a huge exhibit of paintings by Abstract Expressionist Clyfford Still. I bought the show's catalogue and slowly became engrossed by this period of American Art. At the Golden Theatre the words from my undergraduate days came back as I entered this recreation of Rothko's world, and John Logan's script has made these words reverberate once more.

When Ken, Rothko's new studio assistant, arrives at the studio the first day wearing a suit and tie Rothko berates him for not coming in properly dressed to a working studio. As the extraneous layers of clothing are shed we get to know him as a young man who aspires to be a great artist one day. Rothko roars back that he will never be a great artist unless he learns the canon of Western art, literature music, and above all that he must read Nietzsche. The stage is set for an Apollonian versus Dionysian struggle of wits between the two. The young man genuinely wanting to understand the spark of genius that ignites the old man's artistic drive while the towering, seemingly unfeeling Rothko eternally reminds him that he is nothing more than a mere unimportant employer, and that in this studio it is all about Rothko.

Easy to see Rothko as a self-absorbed sour bully, and Alfred Molina embodies that to the hilt (this being his strongest Broadway performance to date), but the truth of the matter is that in his own monomaniacal way he is trying to make the kid understand that art is deeper, much deeper than he ever thought it could be. Molina is also able to bring that across admirably. When he must fire Ken because he has decided to turn down the Four Seasons commission, Molina tenderly touches the young man's cheek and urges him to make something of himself by learning to see things differently. Eddie Redmayne's Ken is an absolutely brilliant creation. Throughout the course of the drama he goes from being a wide-eyed ingenue cowering in the shadow of both taskmaster and tormentor to becoming a spokesperson for the new generation of Pop Artists who threaten Rothko's very own artistic existence. Mr. Redmayne's performance is one of the great Broadway debuts of the season.

Then there are the paintings themselves, beautifully recreated by Mr. Oram. They are the other characters in this play. They enter and exit and play their mute roles as the two characters carry them in an out of their big easel, each replacement cleverly signaling a new scene. The paintings are monumental, and yet fragile and sad -- perhaps carrying the weight of Scripture within their frame. They are the subject of the drama, and yet they will forever be relegated to being decoration. For Rothko, who envisioned his work occupying the most sacred of spaces, this was the saddest revelation: that his creations would become nothing more than backdrops for wealthy diners. However, as John Banville wrote "In a way, the murals would have suited the Four Seasons, one of those modern-day temples ... where the sons of man - and sons of bitches - feed daily upon the blood sacrifice of their own ferocious, worldly triumphs."

Even though Rothko says at one point that "there is tragedy in every brushstroke" the paintings themselves tell that story, and the story of the compulsive, ego maniacal self-destructive genius who created them.
Posted by Vincent Vargas at 3:29 PM