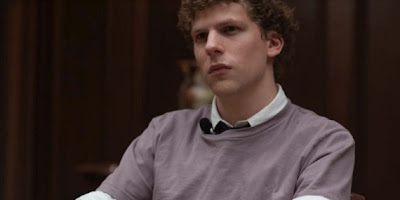 All the buzz you've heard is true. The Social Network, director David Fincher's highly entertaining new film chronicling the genesis of Facebook is a first rate biopic of the rise and rise of Mark Zuckerberg, the Ivy League undergraduate creator of that Internet blue-logo social site that, for better or for worse, has most of the world in its virtual grip. With a first-rate script by Aaron Sorkin that fires with both cylinders, with rapid-pace dialogue reminiscent of His Girl Friday, the story takes us from Facebook's humble beginnings in Harvard Yard, and sweeps us along towards a morality tale conclusion where ultimate redemption might just be a click of the refresh button away.

We first meet Mark Zuckerberg, wonderfully played by Jesse Eisenberg, at a Harvard student watering hole where his relation with his girlfriend (the underused Rooney Mara) is rapidly heading for the rocks. Mark is a genius at embracing algorithms, but an utter failure at courtship. His revenge for being dumped starts a chain reaction that knocks down the university computer network, puts him on academic probation, and brings him to the attention of a pair of buttoned-down blue blood twins (both played by Armie Hammer) who lure Mark into building for them a website for elite WASPs. In a wonderful scene Mark is invited to the outer foyer of Porcellian, the elite "final club" to which the twins belong, and present him with their their offer. Mark runs with the idea, and the prototype of Facebook is born, while the brothers are left out of the picture.

Jesse Eisenberg plays Mark as if he suffers from Asperger syndrome. It is a brilliant performance built on a shaky foundation of fits and starts. Sometimes the character seems to know it all (he walks out of an advanced computer class being the only student in the room who knows the answer to an intricate question that the professor has posed), and at other times his face morphs into an eerie mask where his eyes are all but dead. It is a superb performance of a person unable to relate to others who, ironically, is destined to build the website whose mission statement is the unification and connection of us all. 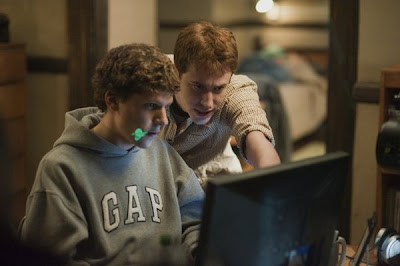 If Mark is the brains behind Facebook, then Eduardo Saverin is its heart. Mark's best friend, played by Andrew Garfield in a breakthrough performance, is a great foil, and one of the best examples of good guys finishing last. There is a jittery quality to Mr. Eisenberg that is beautifully complemented by Mr. Garfield's grounded performance. He is a noble character for whom we feel compassion, especially when the tide of events turn against him.

Facebook might have had the kernel of its invention in the East, but it does not take off until the operation moves out West, and this move was largely influenced by Sean Parker, the creator of the defunct music-sharing site Napster, here played with great flair by Justin Timberlake. The introduction of Parker's character halfway through the film injects the narrative with a shot of adrenaline and directs the film to another plane. We move from the halls of Academia (beautifully shot digitally on "the Red" by Jeff Cronenweth) to sunny suburban houses with pools and trendy sushi restaurants shot with a palette of bright colors that contrast with the autumnal hues of the first part of the film.

Here lies the genius of David Fincher. He is able to juggle the many worlds of this movie with great accomplishment. Not a stranger to unknown worlds (as he proved with his first film, Aliens 3, and later on in the rain-soaked unnamed city of Se7en), he is comfortable in the binary world of computer geeks as well as in the elite world of privilege. He knows how to show the beauty of modern liquid crystal displays, and then turn around and convincingly lead us through a regatta in England where wealth, royalty, and old money mingle. Very few directors nowadays can perform this feat so convincingly.

In many ways, it is a film about the clash of the old and the new. But the success of the film lies not in the fact that it deals with the latest flavor-of-the-month Internet accomplishment. That is only its outer veneer. According to screenwriter Aaron Sorkin, the film has little to do with the Internet and everything to do with themes as old as storytelling itself. As he mentioned at the press screening of the film, The Social Network is about "friendship and loyalty, class, jealousy, and power: things that Aeschylus, Shakespeare, and Paddy Chayefsky would write about." It is for this reason that this very up to date film about our age seems as ageless as tragedy and comedy, the poles of Western art that this work inhabits and balances so deliciously.
Posted by Vincent Vargas at 1:23 PM

wonderful review, strong and direct and distinct. it's an urgent movie but one that stands the test of time for being unique, it's not a breathtaking effort but does its job of telling this intricate story in a fun way.