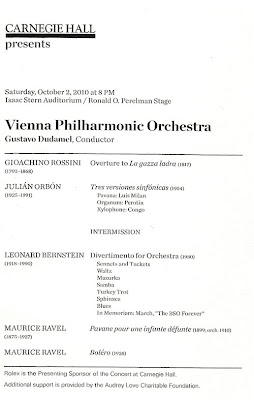 The audience greeted the program with a rousing standing ovation, and Dudamel took his bows standing in the midst of the orchestra, his customary spot during curtain calls. It's not that he's shy; he clearly enjoys the limelight that his talents have brought him, but this is an artist with a humble streak that always wants to remind us that despite his superstar status he is only a musician, just like the rest of the players on stage. But what a musician, and what an orchestra he led tonight! The kind of concert where everyone -- including the performers -- left the hall wearing a smile.
Posted by Vincent Vargas at 10:49 PM