Is Lars von Trier a Nazi? 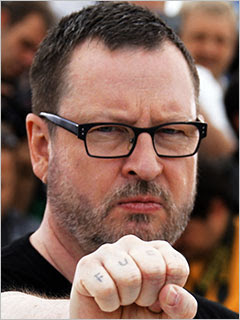 Lars von Trier has been declared "persona non grata" at this year's Cannes Film Festival. During a press conference to promote his new film Melancholia, the Danish director made a number of off-topic remarks that included various odd references to Jews, the state of Israel, and Adolf Hitler. Here is the transcript of what he actually said:

“The only thing I can tell you is that I thought I was a Jew for a long time and was very happy being a Jew, then later on came [Danish, and Jewish, director] Susanne Bier, and suddenly I wasn’t so happy about being a Jew. That was a joke. Sorry. But it turned out that I was not a Jew. If I’d been a Jew, then I would be a second-wave Jew, a kind of a new-wave Jew, but anyway, I really wanted to be a Jew and then I found out that I was really a Nazi, because my family was German. Which also gave me some pleasure.

“So, I, what can I say? I understand Hitler. I think he did some wrong things — yes, absolutely — but I can see him sitting in his bunker in the end. I’m just saying that I think I understand the man. He’s not what you could call a good guy, but yeah, I understand much about him and I sympathize with him a little bit, yes. But come on, I’m not for the Second World War! And I’m not against Jews. No, not even Susanne Bier. That was also a joke. I am, of course, very much for Jews. No, not too much, because Israel is a pain in the ass. But still, how can I get out of this sentence? I just want to say I’m very much for Speer. Albert Speer, I liked. He was also, maybe, one of God’s best children. He had some talent that was kind of possible for him to use during, um… Okay, I’m a Nazi.”

Is Lars von Trier a Nazi? I sincerely doubt it. He enjoys being a provocateur, and he likes to exercise this devil-of-an-impish streak whenever he can. Unfortunately, he neither seems to lack any common sense, nor does he know when it is best to quit and stay silent. To add to the problem, lately he seems to be going through some kind of mid-life crisis that has made him stop drinking but which inexplicably has catapulted him into the realm of psychobabble whenever he faces the press. And then there is his new tattoo -- letters on his knuckles that spell the word FUCK (See picture above). Either a homage to Charles Laughton's The Night of the Hunter (where Robert Mitchum's character has the words LOVE and HATE tattooed on his knuckles) or another of Mr. von Trier's desperate attempts to get a visceral reaction from his audience.

The Cannes Film Festival has banned Lars von Trier because it is illegal in France to say or write anything anti-Semitic. This action strikes me as too sudden, too harsh. It feels very much like the actions of Inspector Javert in Les Misérables, misguidedly following the letter of the law, inflexible and harsh.

My opinion is that Lars von Trier, as an artist, was trying to tell the press, in his awkward, rambling way, that he has an artistic admiration for the work of various accomplished artists that rose to prominence under the Third Reich. Albert Speer is arguably one of the most famous, as well as infamous of the architects of the first half of the 20th century. His grandiose designs spell out National Socialism like no other. His "cathedral of light" design is perhaps the most famous and lasting of his monumental ideas. It was achieved by pointing 130 anti-aircraft searchlights into the night sky and thus causing the effect of columns whose capitals disappear into the night. Every year on September 11, two massive searchlights aimed at the New York night sky give the feeling that the World Trade Center towers are still standing. It is an idea very close to what Albert Speer first devised in the 1930s for the Nazi rallies. The documentary work of Leni Riefenstahl, (where she captured on film Speer's work) for example, is stunning in its execution, although its subject matter propagandizes the evil machinery that helped to create it. One is not a Nazi if one is impressed by Riefenstahl's work. Both Triumph of the Will and Olympia are stunning documentaries of the 1930s, beautifully photographed, stunning in their scope, and masterfully edited. They serve as vivid records for the nightmare that was brewing in Germany at that time.

When it comes to the works of Richard Wagner (whose music has been featured in some of von Trier's films) the debate has been going on for more than half a century as to how we should think of him as a composer. What are we to think of Wagner, whose works highly influenced and inspired Hitler and the formation of National Socialism? I think the answer is very clear. Even though Wagner was a rabid anti-Semite, we must separate the man from his twisted ideology and his evil disciples, and concentrate on his true genius which lies in his sublime music. We must do the same for Speer and Riefenstahl -- separate the artists from the ideology that bred them. No, I don't think you are a Nazi if you like Wagner, the very idea is preposterous. And, no, I don't think that Lars von Trier is a Nazi either, even though his own ill-chosen, rambling words condemn him. He is just a confused artist unable to accurately verbalize what's on his mind. I personally don't think he should give press interviews. There is no point to it. Watch his controversial, maddening, but memorable films. That's ultimately how history will judge him.

Posted by Vincent Vargas at 4:24 PM