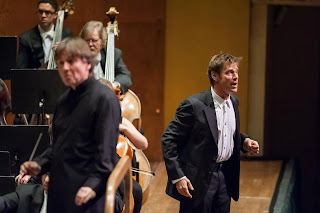 The Philarmonia Orchestra under the baton of Esa-Pekka Salonen visited New York City earlier this week and presented two performances at Avery Fischer Hall.  The first was Gustav Mahler's transcendent Ninth Symphony on Sunday, and the second was a semi-staged performance of Alban Berg's first opera Wozzeck a day later.  Monday's performance of this atonal seminal 20th century work was a memorably exciting experience headed by Simon Keenlyside in the title role (two days after finishing his run of The Tempest at the MET) and Angela Denoke as his wife Marie.  Even though this was billed as an opera in concert none of the soloists used a score, and each of the fifteen scenes that make up this work was acted out as if the work were being performed at the opera house.  What little room was left on the Avery Fischer stage (Berg's orchestration is huge) was used by the cast economically and effectively.  Not for a moment did the evening feel like a stiff concert performance.

Simon Keenlyside had much to do with this.  The moment he appeared on stage, in the first scene, following Peter Hoare's finely acted Captain, Mr. Keenlyside was immersed in his character: a Wozzeck full of ticks, with stooped shoulders, a resigned face and the nervous habit of using one foot to scratch the other.   One has to be totally heartless not to feel sorry for this poor soul.  These days Mr. Keenlyside might just be the best actor working on an operatic stage.

Mr. Salonen conducted the work with his usual attention to detail.  Being a composer himself whose work bares the stamp of modernism, he chose to highlight the atonal aspects of the score.  He whipped the Philarmonia Orchestra into a frenzy achieving very exciting near ear-splitting climaxes.  Particularly memorable -- as well as frightening -- was the D minor interlude that leads to the final scene of the opera.  The players of the Philarmonia, in particular the string section, seemed possessed, giving it their all, and producing a prodigious unforgettable sound.

It's always interesting to see how many people leave a performance of Wozzeck before the work has concluded.  Clearly, these people had no idea what they were getting themselves into.  For the uninitiated twelve tone music can be as alien as the sounds from the dark side of the moon.  However, listen carefully and repeatedly to the work and you will begin to hear the spirit of old Vienna.  Study the score and you will decipher how Berg fashioned a scene between Wozzeck and a quack doctor who is doing experiments on him from one of J.S. Bach's favorite musical forms: the passacaglia.  If you go and do your homework, Wozzeck is not as strange as it first might sound.
Posted by Vincent Vargas at 9:43 PM