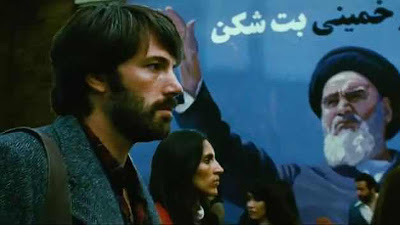 When militants stormed the United States embassy in Tehran in 1979 in retaliation for the U.S. sheltering the deposed Shah of Iran, more than 50 members of the embassy staff were taken hostage.  Six of them, however, escaped and hid at the home of the Canadian ambassador.  Back in the U.S., CIA operative Tony Mendez (Ben Affleck) dreams up a wacky, improbable plan to rescue the six while watching Battle for the Planet of the Apes on TV with his son.  The six Americans are going to pass as Canadian filmmakers scouting exotic desert locations for an imaginary Star Wars ripoff called Argo.

Labeled by Mendez's CIA supervisor Jack O'Donnell (Bryan Cranston) as "the best bad idea we have" the powers that be nevertheless sign off on it, and Mendez begins an eye-opening  journey of discovery in Hollywood-Babylon where he finds out that even an imaginary film requires a ton of pre-production.  He meets with John Chambers (John Goodman) a makeup expert who in the past did disguise work for the agency.  He welcomes Mendez to Tinsel Town by telling him "So you want to come to Hollywood and act like a big shot without actually doing anything? ... You'll fit right in."

The fake project begins to take shape when Mendez meets with producer Lester Siegel (Alan Arkin) who helps Mendez to set up a phony film studio and successfully establish the pretense that this movie has been green lit and will be entering principal photography soon. A memorable, but frightening montage sequence juxtaposes the first reading of the Argo script by actors wearing ridiculous alien costumes with a televised news conference where the very real demands of the embassy militants are being read in English by an angry spokeswoman wearing a veil. Fun and games, and lies and truths merge in a pivotal but indecisive moment of history.

Eventually Mendez manages to sneak inside Tehran, meet the six, and instruct them in record time on the customs, mores, politics and pitfalls of Canadian English.  Time is of the essence, for back at the embassy the militants have realized that six Americans are missing, and armed posses are looking for them.  The film's finale at the airport is a nail biting sequence expertly handled by director Affleck.

The fact that Mr. Affleck was passed over as director when the Academy Awards nominations came out raised a lot of eyebrows.  The Golden Globes, last weekend, honored him with its version of the best director prize.  In addition, this year's Oscar host Seth MacFarlane believes that Ben Affleck got robbed in the Best Director Oscar category.  It should prove to be an interesting Oscar ceremony on February 24.
Posted by Vincent Vargas at 10:09 AM