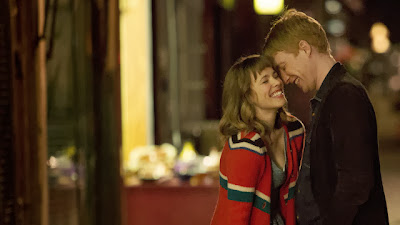 Watching a scene again and again, with different outcomes, is cinematic. It puts us on the level of a Hitchcockian Rear Window voyeur watching rushes of an unfinished film, or re-watching a favorite movie where we always find something new each time we delve into it. In many ways, About Time is a bit like many of Mr. Curtis's previous films: a family dramedy filled with memorable characters forming a wider family. We follow their lives through the years, in scenes of celebration and sorrow. Somehow, we have seen it all before in his screenplay of Four Weddings and a Funeral, Notting Hill, and Bridget Jones's Diary. This is certainly not a criticism of the film, but an observation that his latest work is meta cinematic. and any resemblance to any of his previous films is actually not incidental. This might just be the most interesting part of the film for cinema buffs. On the other hand, if you just surrender to the story and the engaging performances by Mr. Nighy, Ms. McAdams, and especially Mr. Gleeson, whose ability with comic timing reminds us of the young Hugh Grant, you will be more than pleased by this film.
Posted by Vincent Vargas at 2:01 PM