Two Chords that Shook the World

In August of 1857 Richard Wagner stepped away from the massive half-completed Ring of the Nibelung (he had already fully orchestrated Das Rheingold and Die Walküre) and began work on what would become one of his most important achievements. The opera Tristan und Isolde, the well-known story of forbidden love, was based on the medieval romance by Gottfried von Strassburg, and inspired by the philosophy of Arthur Schopenhauer and Wagner's illicit love affair with the wife of his patron, Mathilde Wesendonck. With a libretto written by the composer, the music was completed in August of 1859. Within the first few seconds of the astonishing score, Wagner established the disintegration of tonality and pointed the way for the future widespread use of atonal musical composition in the 20th century via the arrangement of four simple notes: the musically unexpected combination of F, B, D# and G# which has come down to be known as the famous "Tristan Chord."

It was fifty years ago, on July 6, 1964 (and nearly a hundred years after the June, 1865 premiere of Tristan) that Richard Lester's black-and-white film A Hard Day's Night forever changed rock and roll, and became one of the most influential musical films of all time, capturing forever in celluloid John, Paul, George, and Ringo at the height of the Beatlemania craze. Both the madcap comedy film and the album of the same name begin with a musical chord that has been described, discussed, and debated as much as its famous antecedent of the 19th century.

To know how Wagner did it, all we have to do is read the sheet music (although during the early rehearsals for the first performance, both the musicians and the conductor complained that the score was unplayable). They were unaccustomed to playing what must have been for their ears the music of the future. Ever since, orchestras around the globe have followed the composer's careful notation and have played the "Tristan Chord" exactly as Wagner wrote it. It hasn't changed in more than a century.

But Rock is a different animal, especially the output of The Beatles who during their meteoric career resorted more and more to remain in the carefully controlled safety of the recording studio and eschew live performances. Inside EMI Studios was the "Fifth Beatle," George Martin, who as arranger and musical guru literally made the confines of the place a research lab where he filled the gaps between the band's raw talent and the actual recorded sound they wanted to achieve. The creation of the famous chord that opens the film was a creative ensemble that included the Fab Four as well as Martin. 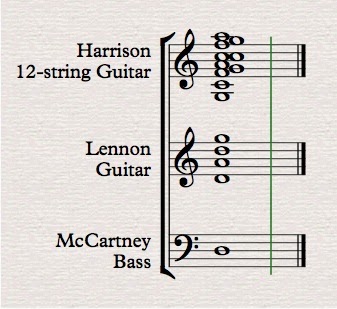 The above shows more or less how the chord was achieved, although this is still highly debated. The basic ingredient to much of the sound is George's 12-string guitar Fadd9 chord (an F and a G chord played together). But to this we also have to add Ringo, who added a riff on his snare drum, and the ever-present George Martin, who struck five notes on a Steinway grand piano while holding down the sustaining pedal and caused the harmonics to blend.

Perhaps we will never know how this famous chord was completely achieved. Likewise, a lot of ink has been spilled detailing how the "Tristan Chord" affected music for the rest of the 19th century, and its impact on composers ever since. In a similar way, the opening chord from A Hard Day's Night will continue to mesmerize listeners, who care about great music, for many years to come.
Posted by Vincent Vargas at 5:08 PM