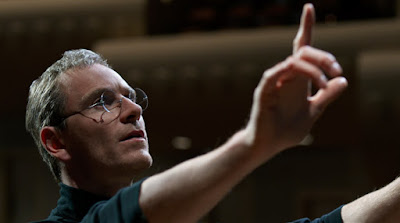 Steve Jobs, Danny Boyle's new film, from a screenplay by Aaron Sorkin, is a series of extraordinary scenes, most of them acted out backstage before some of Apple Inc's fabled announcements of their new products. This is the second film that screenwriter Sorkin has written about technology. David Fincher's The Social Network, which brought to life the genesis of Facebook, earned Sorkin a well deserved Oscar. This time around his screenplay focuses on the relationships between the man and various people around his orbit. A large percentage of the script is composed of conversations between two people, making the film a very private, inside look at Steve Jobs. The only public scenes are those when Jobs steps on the stage of an auditorium, to rousing cheers, as an expectant public drools at the mouth in expectation of the latest miracle from Cupertino. It is not a typical biopic of the genius who revolutionized the way we interact with technology. Far from it. The film begins with the introduction of the first Macintosh, meanders through Jobs's failing venture away from Apple, with the NeXT Cube, and concludes with his return to Apple and the unveiling of the first iMac. Towards the conclusion of the film he promises his estranged daughter that one day she will be able to throw away her walkman, and carry a thousand songs in her pocket, but the iPod is barely a dream as the concluding titles of this film roll.

As usual, Michael Fassbender morphs effortlessly into the title character, giving a subdued performance where he balances the Zen-like public Jobs with a private man who is acquainted with personal demons. Kate Winslet is also brilliant in her role of an Apple executive who is part lion tamer to Steve Job's beast, and part unfulfilled love interest.  Jeff Daniels as Apple's CEO, Michael Stuhlbarg as a member of the original Macintosh team, and Seth Rogen as Apple co-creator Steve Wozniak give memorable performances.

At the heart of this film is Steve Job's rocky relation to Chrisann Brennan (played by Katherine Waterstone), Jobs's high school girlfriend, and his daughter Lisa, who throughout the film grows to a college-age student, and is memorably played by Brazilian newcomer Perla Haney-Jardine.

Behind the scenes, Alwin Küchler's cinematography runs the gamut from grainy filmstock for the 1980's scenes, and switches to digital as the story progresses, and Daniel Pemberton's score has a driving, subliminal beat. Danny Boyle's direction is surprisingly subdued, as is required by this very subtle script.
Posted by Vincent Vargas at 4:28 PM