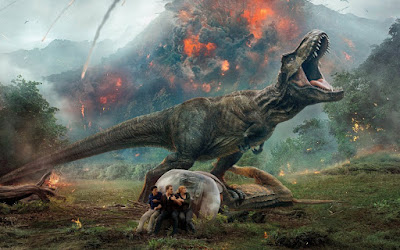 Jurassic Park: Fallen Kingdom is the perfect title to describe the current state of the franchise that started with Michel Crichton's novel and Steven Spielberg's classic 1993 film. This fifth film in the series finds Owen Grady (Chris Pratt) and Claire Dearing  (Bryce Dallas Howard) going back to Isla Nublar to save the last remaining dinosaurs before the mother-of-all volcanoes sinks the island. Claire has formed a Dinosaur Protection Group, and after visiting Benjamin Lockwood (James Cromwell), the partner of Dr. Hammond, who created the original Jurassic Park, and his secretary Eli Mills (Rafe Spall), she seeks out former dinosaur wrangler Owen because she knows he can help her to save the last living Velociraptor, and because she still has a major crush on him. Dr. Lockwood tells her that the dinosaurs will be placed on another island where they can live peacefully without mankind. Meanwhile, Dr. Malcolm (Jeff Goldblum) is in Washington in front of a Senate committee, and in his best Cassandra mode, makes some gloomy pronouncements about how the dinosaurs need to perish in order to correct Dr. Hammond's mistake, and if not, how we will have to learn to co-exist with them. Mr. Goldblum, a stalwart in this series, and a performer one can always depend on when the script falls apart, ends up giving a performance so removed, that it feels like he phone it in.

Once in Isla Nublar we meet big White hunter Ken Wheatly (Ted Levine), and from the first shot of the man we know that he's going to be trouble (so much for character development!) It seems that both Claire and Owen have been duped. The animals are being rounded up so that they can be put up for auction to rogue states so that they can serve as military weapons. I wonder if a Velociraptor or a T-Rex can tell one army from the other? But who cares! The film becomes a creature feature inside Lockwood's old dark house when we find out that the stately state has a lab in the basement cloning new creatures, including an outrageous creation that even outdoes Indominus rex from the previous movie.

Despite the participation of a serious cast, including B.D. Wong reprising his role of genius geneticist Doctor Wu, and Geraldine Chaplin (her fourth film with Spanish director J.A. Bayona) as a nanny, the film ends up being nothing more than a bridge towards the next part of the franchise, which if you wait around after the movie's end credits, will tell you that the next chapter will be a glitzy update of Sir Arthur Conan Doyle's The Lost World as dinosaurs run amok free all over the world.  I guess the new movie ought to be called "The New Kingdom." Or perhaps, it's time to end the series right now, since the premise has left the original park way behind.
Posted by Vincent Vargas at 7:57 PM