ELEKTRA at the MET 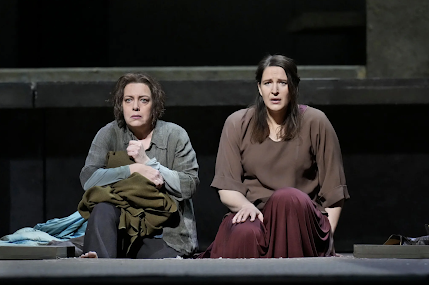 When the 2021-2022 MET season was announced, this revival of Patrice Chéreau's production of Richard Strauss's Elektra immediately became the one to see. And yet, last night there were two empty seats right next to me in the center of the Orchestra section, row K. Was it the persistent April showers that dominated Saturdays weather that caused some people to stay home, or did they have advanced word that Nina Stemme, in the title role, was suffering from seasonal allergies? This was announced to the audience last night, together with the news that she would go on and sing. The announcement was greeted by thunderous applause. I've been noticing this year that pre-curtain announcements have become the norm at the Metropolitan Opera. While the appearance of a MET staff member's appearance before a performance usually brings jitters to an audience, this season is being used more as a friendly reminder to keep those masks covering one's mouth and nose.

As expected, the pollen that's floating around everywhere did have an effect on Ms. Stemme. She is onstage from beginning to end, and most of the time trying to rise above one of Strauss's wildest, most savage music played by an ensemble of over one hundred musicians. It is one of the composer's largest orchestrations. It mostly affected her lower notes, although during her opening monologue some of the notes leading to the high notes suffered as well. It might not have been one of Ms. Stemme's greatest performances, but it was great that she attempted it and was able to achieve such high standards. I always marvel at how professional singers can sing over a cold or an allergy and still manage to sing such a poignant performance as Ms. Stemme was able to do last night.

Lise Davidsen as Elektra's sister Chrysothemis continues her New York love fest tour with these performances. What a season it has been for her! Also how well calculated it has been, starting slowly with the role of Eva in Die Meistersinger, then increasing the odds with Ariadne aux Naxos. Her Chrysothemis is the culmination of an incredible season of singing. I have been critical of her that she overpowers all the other singers with her enormous voice. Last night was different. She seems to have been holding back (perhaps because she knew that her co-star was not in good voice), and this was good for the entire production. What a contrast in voices we have in these two women. Ms. Stemme's lush but powerful soprano against Ms. Davidsen's loud, strident, bottom heavy voice (she started her career as a mezzo!). This is what we come to see in opera: two amazing singers approaching those notes from different camps and offering a delicious contrast that also speaks volumes about the characters they are playing.

Mr. Chéreau's production updates the action to the present, and thus makes a firm statement of the universality of this story. His staging, however, comes close to robbing the work of the purpose of some of the music. For example, Klytemnestra's entrance is some of the most evocative music Strauss ever wrote. It is a wild depiction of an old lady whose guilt over the murder of her husband, Agamemnon, is plaguing her. I always pictured this character, weighed down by amulets, stomping in to this music. Perhaps this approach is way too stereotypical for today's audience. Perhaps it is too much like a silent movie villain entering to the tune of brutal, dissonant chords. Here she just walks in. It can be argued that now Strauss's music, meant to accompany a more melodramatic entrance, now sounds over the top. In the pit, Donald Runnicles offered an intelligent reading of this work in tune with this production. The orchestra sounded incredible under his baton.

If you want to see two of the great singers of our time together on the same stage, then do not miss this revival of Elektra.

Posted by Vincent Vargas at 5:49 AM