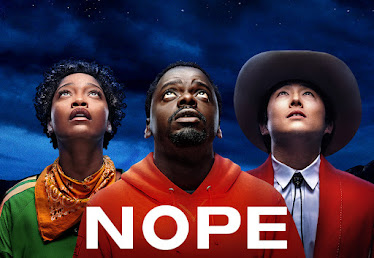 On the 19th of June, 1877 British pioneering photographer Eadweard Muybridge made a series of photographs of the race horse Sallie Gardner, owned by the former governor of California Leland Stanford. The result is well-known to every student of film. When the photographs are shown in sequential succession the horse is seen at full gallop, at one point all four legs off the ground.

Arguably the beginning of motion pictures, or at least an intermediate stage towards true cinematography. This, and the fact that the jockey riding the horse is an African-American man is the genesis of Jordan Peele's latest film NOPE. But that's just the beginning. The writer/producer/director starts there and his imagination propels him towards not just a rumination of motion pictures, but also its link to the American West, or better yet: the myth of the American West as created by Hollywood, and how this myth continues to survive in our collective unconsciousness. And, oh yeah the film also explores the afterlife of child actors once the limelight has either faded away, or in this case, ripped apart. And, oh yeah, it's also about aliens. Not the ones that cross our American border everyday, but the ones that they say come from many light years away, from another galaxy, and who reach us via flying saucers.
In the last few months, the various trailers have revealed some of the cryptic images of the film: a veiled lady with no lips and a horrific smile (shades of Conrad Veidt's character in the silent film The Man Who Laughs), a chimp with bloody hands and mouth, and most mysterious of all those colorful dancing man ballons that dot the western valley prairie, and rise up to the sky. Also we can't ignore the fanboy Internet chatter that the title of the film is an acronym for Not Of Planet Earth. Guess what? All of those images are tied together in what has to be Mr. Peele's most audacious and bewildering reflection on modern American culture. And the meaning of the title? Yeah, there's something to that as well.
And of course there are the stars of the film: OJ, played memorably by Daniel Kaluuya, and his sister Emerald, the incredible Keke Palmer. These siblings own a ranch where they breed and train horses for the Hollywood and TV industry, a business started by their father who early on in the film dies a rather mysterious death. To further make ends meet, OJ sells horses to Ricky “Jupe” Park (Stephen Yeun), a former child star who now runs a Western-themed amusement park called Jupiter’s Claim, and who is haunted by a terrible event that happened on the set of his TV show. When strange occurrences begin happening at the ranch they seek the help of an IT guy (Brandon Perea), and later on when things really start getting weird, they bring on an even weirder cinematographer (Michael Wincott) to photograph the event and get "the Oprah shot." Angel, the IT guy installs surveillance cameras at their house, but Antlers, the cinematographer, comes in with a hand-cranked IMAX camera. Even though this is a contemporary story, you'd think all of this this was happening forty years ago: the film is filled with turntables, VHS recorders and all kinds of obsolete technology.
NOPE is an entertaining movie that will produce interesting conversations. It is certainly one of the most thought-provoking films this summer by a filmmaker that specializes in making sure you think. And at the risk of further spoiling the film, let me just say that you will be doing a lot of unpacking when you go to see this movie.
Posted by Vincent Vargas at 7:49 AM

Excellent movie and an excellent review. I got the cinematography was spectacular and the creature design exceeded my expectations even though I had heard that we would be seeing “aliens”.

I need your opinion on something. My daughter and son and their friends and I had a long long conversation on the meaning of the shoe. Our attention was drawn to it repeatedly… and in its museum case, it was positioned in the same improbable position that it was on the TV set. I’m interested in your take on the symbolism.