The Pillowman Nears the End of its Run 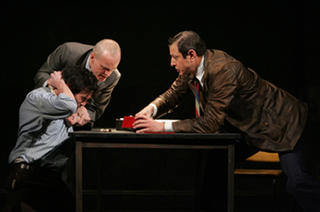 The Pillowman, Martin McDonagh's macabre play, is closing in a few weeks after a successful, but short run on Broadway's Booth theater. I saw it twice this summer, and read the work after my first visit. My reaction to the play was one of wonder and awe both times I saw it. Pretty much the same reaction I had when years ago I saw the original Broadway run of Amadeus with Ian McKellen, a play I was also fortunate to see twice. Although The Pillowman does not possess a performance of the grandeur of the young McKellen's, it is an amazingly written work, and it ranks with Peter Schaffer's play as one of the most memorable nights one could have in the theater. The cast of The Pillowman is spectacular, with Jeff Goldblum and Billy Crudup giving memorable performances, Zeljko Ivanek giving a puzzling reading of his character, and the amazing young actor Michael Stuhlbarg giving one of the most satisfyingly poignant performances now on Broadway as a mentally retarded innocent, who proves to be not as innocent as he first appears.

Part of the fun of going to see this play was waiting after the performance for autographs. This is a very generous cast with the fans, and Jeff Goldblum stays night after night until the bitter end signing autographs and taking pictures with everyone -- especially with the ladies. The talk of the town is that everyone wants to work with him because he is such a class act. It was fun, for instance, to have Mr. Goldblum sign my script of the play, ask me where I bought it and have him comment on the fact that he had not seen this version of it. (The current orange-covered version of the play, published by Faber & Faber, lists both the British National Theater cast as well as the American Booth Theater cast).

Although, structurally, the American version of the play (in two acts) works better, in my opinion than the three-act format as published, the British cast must have been something to behold. I would have loved to have seen Jim Broadbent in the role of Tupolski. Ever since I saw this fine actor playing Sir W.S. Gilbert in Mike Leigh's film Topsy Turvy, I have come to respect him as one of the finest character actors of his generation. He was even very good in the movie Moulin Rouge, which must have taken a lot of effort to pull-off. The British cast also included David Tennant in the role of Katurian K. Katurian. I didn't know who this actor was until I got into the British Sci-Fi series Dr. Who this summer and realized that he will be playing the Doctor next season.

Personally, I will miss The Pillowman once it finishes its run in a few weeks. It is rare that a play can provide an audience with chills and thrills, while at the same time offering them beautifully crafted performances, and a script of Kafkaesque beauty and complexity. I don't think that I will have a chance to see The Pillowman again before it closes, and I don't think that I really want to. I would like the memory of those two performances to linger on. Along with Doubt, and the revival of Who's Afraid of Virginia Woolf?, The Pillowman was responsible for a great season for drama on Broadway. Let's hope that next season proves to be of the same high caliber.
Posted by Vincent Vargas at 11:32 AM

I think you're right on track and not many people are willing to admit that they share your views. matthew fox shirtless is an AWESOME place to discuss LOST.

What a wonderful invention it is, this thing we call the Internet!

Cracking Technorati Top Blogs
Justin Pfister is a web developer with a business background who is currently working for Synapse Group, Inc.
Everyone used to read books but now they just go to the movies or rent a DVD. I recommend you visit http://www.marcella.cc for a unique experience you will not soon forget.

Is it possible to have your recordings of Bayreuth Festival and cd covers,too?