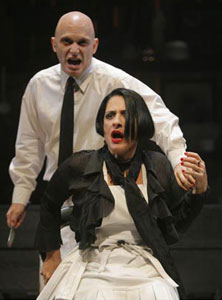 The skeletal remains of Sweeney Todd, The Demon Barber of Fleet Street are on view eight times a week at the Eugene O'Neill theater. Stephen Sondheim's big operatic musical has been re-orchestrated, turned into a chamber work, and removed from traditional Victorian London. The setting of the work is now a room in an insane asylum (filled with Victoriana bric-a-brac) and populated with Michael Cerveris, Patti LuPone and a cast of eight incredibly talented singing actors and musicians. The result is a production that exasperates as often as it delights.

Most of the things that I liked about the original production (with Angela Lansbury and Len Cariou) are gone: the big orchestra, the big sets, and the big climaxes. In 1979, Hal Prince turned Sondheim's work into an unforgettable commentary on the Industrial Revolution's effects on the common man. It was a huge spectacle that catapulted Sondheim's work into the level of opera, took home Tony Awards for its creators and stars, and assured Sondheim's place in the pantheon of immortals. I remember falling in love with the work instantly (right from the first couple of bars from the organ) when I first heard it. My two visits to the original production at the then Uris Theater (now the Gershwin) were simply unforgettable theatrical evenings.

This production is a totally different experience, and if you have seen this work before this production will really challenge you. In fact, in order to appreciate the show's current run one has to be somewhat familiar with the work. If you are, then you will be more accepting of the production's conceits. The staging by British director John Doyle does not help the run-of-the-mill theatergoer or the neophyte to the work. Since everything takes place in one room, the audience is forced to imagine the various settings where the story takes place (streets, tonsorial parlor, bakehouse) and try to piece the story together from the lyrics and dialogue, which are beautifully enunciated by the cast. The short list of props includes a macabre black coffin, a ladder, and a symbolic tiny white baby coffin that Michael Cerveris clutches like the distant memory of his lost wife and child.

The most surprising and effective aspect of this production is the fact that the actors act, sing, and play all the musical instruments. This triple threat tour-de-force is something to behold, and it is quite surprising to hear how good they all are performing their various duties. Many of the actors play more than one instrument throughout the course of the show, and the new orchestrations are intelligent and quite lush. I do wish they would have gotten some older looking, drabier instruments, though. Patti LuPone's tuba is way too shiny, and Michael Cerveris' guitar is way too cheerful, colorful, and modern looking for this production.

Speaking of Michael Cerveris and Patti LuPone: they are very talented performers, and they are quite good in the roles of Sweeney and Mrs. Lovett. With his bald head, leather jacket, and pale make-up, and her Louise Brooks-like hair and torn fishnet stockings, they both look like escapees from a German Expressionist side-show. Overall, the singing is excellent from the leads and from everyone in the cast; likewise, the acting is superb. In the roles of Johanna and Anthony, Lauren Molina and Benjamin Magnuson are both making their Broadway debuts, and they are very memorable in their pivotal parts. Again, the same can be said of all ten members of the cast. This is a very tight ensemble, and I urge you to see the production because of this reason. However, if you don't know the work, make sure that at least you listen to it and get your bearings before you go. It will prove to be a less abstract, more enjoyable experience if you prepare.

I predict many Tonys for this production, so catch it before it closes. Sondheim's works, as a rule, don't last too long on Broadway, and it will be a shame if you miss this unusual version of one of our very own musical treasures.
Posted by Vincent Vargas at 5:52 PM