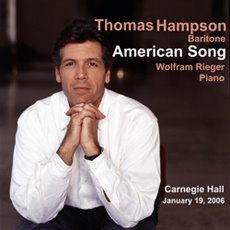 American Song, the Thomas Hampson recital at Carnegie Hall last Thursday was a critical and popular success. It happened on the nineteenth of the month, that is, two days after Marilyn Horne's birthday. Two days after the concert itself, an audio capture of the event appeared posted on a Usenet group. The great baritone performed some of the best songs by Barber, Ives, Rorem, Thompson, and others. It was a carefully selected group of compositions, chosen and presented by Mr. Hampson with a didactic tone that seemed to work most of the time. At the conclusion of the show he offered two encores of incredible beauty: Stephen Foster's well-known "Beautiful Dreamer," and Haydn Wood's poignant "Roses of Picardy." It was towards the end of the program, right before he sang the Stephen Foster song that Mr. Hampson turned to the audience (as he did throughout the concert to explain and complain -- more about that later) and dedicated the Foster song to Marilyn Horne for her birthday. On the subject of American song, all singers owe a debt of gratitude to Marilyn Horne. Her album "Beautiful Dreamer, The Great American Songbook" with the English Chamber Orchestra under the great Carl Davis has done a lot to promote popular, serious American music. The fact that a day before Mr. Hampson's concert it was reported that the legendary mezzo-soprano was diagnosed with localized pancreatic cancer, added to the poignancy of Mr. Hampson's dedication. I'm not sure if Marilyn Horne was present at Carnegie Hall, but a friend who was at the concert told me that Mr. Hampson turned to the side when he dedicated the song, seemingly talking directly to someone.

According to Anne Midgette, in the New York Times, "there was a sense of unruliness in the public from the start, when the first song was delayed by an audience member walking around the auditorium, and it continued with applause in the middle of sets that Mr. Hampson tried to quell, tactfully, repeatedly and unsuccessfully." Perhaps, the fact that Mr. Hampson talked a lot between numbers led to this kind of audience behavior. For instance, after he finished Walter Damrosch's setting of the poem "Danny Deever" in which a soldier is executed, Mr. Hampson said to the audience "That was Teddy Roosevelt's favorite song!" Was that random piece of trivia really necessary? It not only brought on laughter, but a woman in the audience stood up and interrupted Mr. Hampson by asking him why the soldier was executed.

I will end this report about the concert by once again quoting the beginning of Ms. Midgette's review: "A wave of laughter greeted the song's last line, and from the Carnegie Hall stage, the baritone Thomas Hampson looked at the crowd in bemusement. "All over the country they laugh at that!" he said. His perplexity was understandable. The text was Edward Arlington Robinson's poem "Richard Cory," set to music by John Duke. It describes a handsome, wealthy man who is the envy of his community. In the abrupt final line, this favored child of fortune "went home and put a bullet through his head." Wry, bitter, unsettling: yes. But funny?"
Posted by Vincent Vargas at 11:37 AM

I read over your blog, and i found it inquisitive, you may find My Blog interesting. So please Click Here To Read My Blog

Hi,
While I was searching through Blogger I came past your site, it is not really the information I was after about breast cancer but I did stay to read your blog and found it interesting and well done. Keep up the good work and hopefully I will visit again sometime and also find the information on breast cancer that I was looking for in my travels.
Regards,Regards,

Hi,
I came past your site while I was searching through Blogger, it is not really the information I was after about breast cancer bracelet but I did stay to read your blog and found it interesting and well done, I do like what you have done with your site. Keep up the good work and hopefully I will visit again sometime and also find the information on breast cancer bracelet that I was looking for in my travels.
Regards,