Satyagraha at the English National Opera 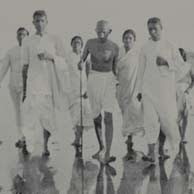 The new Production of Philip Glass's opera Satyagraha is now playing at the English National Opera where I saw it last night. This production is a joint effort of the ENO and the Metropolitan Opera, and it is scheduled to be performed at the MET this forthcoming season. The nearly sold-out crowd at the London Coliseum was remarkably receptive to this work written many years ago by one of the leading American minimalists, and one of the few works that the ENO has presented in a language other than English. At the request of the directors, the ENO also chose to present this work, sung in Sanskrit, without the use of super-titles.

At the helm was the creative team Improbable made up of director Phelim McDermott and set designer Julian Crouch. Theirs is a captivating and challenging production which makes extensive use of newspapers and puppetry in order to tell the story of the spiritual conversion of Mohandas K. Gandhi. They have rethought Glass's work using projections and a vast array of giant papier-maché figures of impressive size and complexity, some of which are assembled right on the stage by the cast. This aspect of the production, although quite remarkable in its stage-craft, manages to take our mind away from the music. Puppetry seems to be the order of the day at the ENO these days, with this production following on the heels of Anthony Minghella's remarkable Madama Butterfly which used several Japanese bunrako puppets.

I am quite interested in the metamorphosis that this production will undergo when it comes to these shores. The London Coliseum is a a rather large theater, as far as London venues go, but it is small compared to the vast Metropolitan Opera stage. As with Minghella's production of Butterfly there is a great danger that the dimensions of the MET will totally swallow Improbable's visual effects. We are in for a treat, I can tell you that, and I can't wait to see this production when it gets to New York. Satyagraha premieres at the MET on April 11, 2008.
Posted by Vincent Vargas at 11:01 AM