Lorin Maazel to conduct at the MET 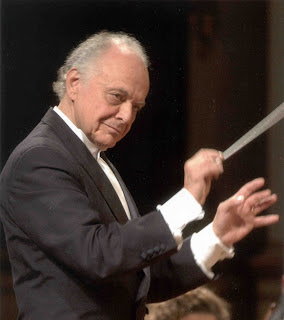 The following bit of news appeared in The New York Times on February 22. The article is by Daniel J. Wakin.

It took only 45 years, but Lorin Maazel is returning to conduct at the Metropolitan Opera.

Mr. Maazel, the music director of The New York Philharmonic will lead five performances of Wagner’s Die Walküre in a run from Jan. 7 to Feb. 9, 2008, the Met said yesterday.

Peter Gelb, the Met’s general manager, said the appointment — which was announced a week before next season’s unveiling — was part of a long-held plan.

“It’s been my intention from the beginning of my appointment to populate the Met with the world’s greatest conductors,” Mr. Gelb, who took over this season, said in a telephone interview. “To have Lorin Maazel conducting ‘Walküre’ next season is a great coup.”

Asked why it had taken so long for him to return to the Met, Mr. Maazel said there was no particular reason. “Once in a while they would contact me about some project, which somehow didn’t work out because I was busy elsewhere, or about a revival of something I was not interested in being involved in,” he said. “That’s the way the cookie crumbles. It happens to many artists.” He also said he was busy over the years with other opera projects.

Mr. Maazel said he was particularly attracted to the tenderness of “Walküre.” “There’s that kind of warmth and passion that appeals to me greatly,” he said. The choice was a surprise because, as Mr. Gelb put it, Wagner is the “musical territory” of James Levine, the Met’s music director and one of the world’s leading Wagner interpreters.

But Mr. Gelb said that Mr. Levine decided to step back from the production because of scheduling conflicts. Mr. Gelb said he approached Mr. Maazel after a Philharmonic concert last month to congratulate him and raised the idea, pointing out how long it had been since Mr. Maazel had conducted at the Met: the 1962-63 season, when he led performances of Mozart’s Don Giovanni and Strauss’s “Der Rosenkavalier.”

“He seemed pleased,” Mr. Gelb said. Remarkably, for a profession famous for dates being booked years in advance, Mr. Maazel had time free for the “Walküre” run, Mr. Gelb said.

Mr. Maazel, who has extensive experience conducting opera and running opera houses, said that at one point he had sworn off the art form.

“I was getting tired of wrestling with stage directors, and all the problems that opera houses have, organizational ones,” he said. “I’ve never been able to stand by that. I have stage dust in my nostrils.”

Posted by Vincent Vargas at 6:26 PM