Confessions of a MET insider 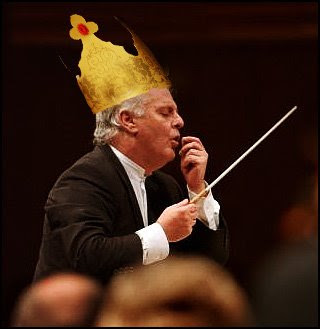 This was sent to me today, and I thought that it would be appropriate to post here. Here is some of the musical backstage drama that occurred last week as Daniel Barenboim was preparing his MET opera debut conducting Tristan und Isolde.

"His approach to the orchestra was very arrogant. He has a way of presenting his ideas as though it is our fault that we didn't think of them. Nevertheless I think most people admired his musicianship and either learned or were reminded of a lot of important musical values. On the other hand, while every phrase was beautiful, I don't think he got the same shape, intensity, and drama that Levine gets. I think a lot of the problems resulted from his disorganization at the rehearsals.

"We had nine hours of rehearsal with the orchestra alone, and other than a cursory run of the Vorspiel, we never played longer than 10 seconds at a time. He jumped around from spot to spot for 3 long mornings, unsure of how to proceed. It's very difficult to recover from that sense of disjointedness and disorientation. Once we reached the pit, he decided after an hour that our usual setup would not work, so he radically reorganized our seating. Whereas we usually sit more or less like a normal orchestra (with the winds in the middle) he moved all the strings left and all the wind and brass right. The 1st Violins were moved into a formless mass surrounding the podium and the seconds to where the firsts normally sit. The winds are now way off to the right. I happen to like this seating, mostly because it brings the string section together as a unit, but it takes a lot of getting used to, esp after years the other way. I think he likes to keep everyone (including himself) guessing. It's a power thing. I suspect the performances will improve as we remember the sweep of the piece and get used to the new seating. It's been refreshing… it's always great to do something differently, and Barenboim is very good at demanding accountability from everyone (not JL's strong point). We are all on the edge of our seats, in a good way, but I miss a certain depth that Levine gets from this most profound piece."

Posted by Vincent Vargas at 2:47 PM