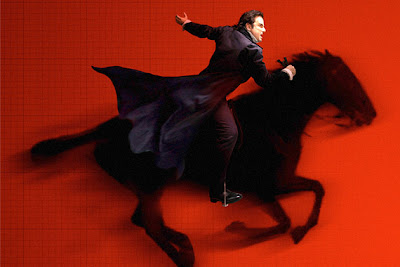 The Metropolitan Opera has not staged La Damnation de Faust since the beginning of the twentieth century (1906); however, this season the MET has revived this unusual work by Hector Berlioz in a decidedly 21st century production. Not entirely big enough to be called an opera, and at the same time too grand to be labeled a mere oratorio, La Damnation de Faust is a unique work that even though might defy categorization ends up being one of the composer's most satisfying creations.

The MET's new production by Robert Lepage (who will be directing the MET's upcoming new Ring of the Nibelung production) makes extensive use of interactive video projections that seem to react to the movement and voices of the actors (Is this the stylistic and directorial approach that he will take with the MET's new Ring?). The result is a phantasmagoric, and at times surreal staging that requires a degree in computer sciences to fully understand, but which manages to be artistic and relevant to Berlioz's music drama.

The composer is just one among many who obsessed over Goethe's epic drama Faust. History tells us that Berlioz read it constantly in a French prose translation by Gérard de Nerval. He even co-wrote the libretto along with Almire Gandonnière. When it came time to write the music, Berlioz created a score of extreme beauty and great power. I think he knew that it was impossible to match the breath and scope of Goethe's masterpiece, but it didn't stop him from letting his own genius go to work on the Faust legend. The result is one of the great adaptations of Goethe's work, rivaled perhaps only by Arrigo Boito's Mefistofele.

Had the MET mounted this work twenty-five years ago, it would have starred Plácido Domingo, Jessye Norman, and Samuel Ramey and I am sure that it would have been one for the ages. The current cast, which features Marcello Giordani as Faust, Susan Graham as Marguerite and John Relyea as Méphistophélès may not ignite the vocal fire of my dream team, but they each do a fine job throughout. John Relyea is particularly strong in the vocally showy role of the devil. His costume, which is reminiscent of the garb usually worn by bass-baritones performing Gounod's Faust circa the late 1890's, is memorable in an old fashioned way, and it makes for an excellent contrast to the otherwise ultra-modern production.

James Levine conducted the Metropolitan Opera Orchestra with great flair. The result was a polished reading of Berlioz's quirky score which was matched only by the intensity and polish of the MET's chorus under the direction of Donald Palumbo. Their singing was one of the true highlights of the evening.
Posted by Vincent Vargas at 12:33 AM