Phèdre at the National Theatre 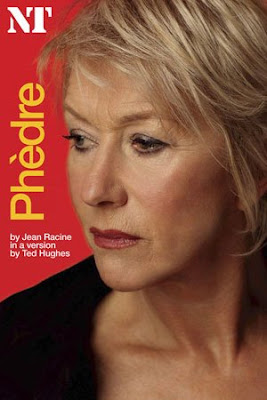 When it seemed that it was impossible to get a ticket to the sold out run of Phèdre at the Lyttelton auditorium of The National Theatre in London, lo and behold a pair of tickets opened up two days before my flight back to New York. It was one of the reasons why I had flown to London in the first place: to see Jean Racine's tragedy with the incomparable Helen Mirren. When I got to London though, the writing was on the wall and it spelled the sad reality that I was going to go back home just having been to the city where Phèdre was playing.

There were other ways of getting in. One was the black market, where tickets were going upwards of £100. The other possibility was praying for returns the day of the show. Neither paying 100 quid for a ticket that normally cost £39.50 or having to get up early in the morning, cross the Thames and queue up for returns that may not materialize excited me. Near my hotel, every morning I would pass the crowds lining up early outside Wyndham's Theatre for the scarcely few standing room tickets to see Jude Law in Hamlet. Call me lazy, but somehow I just didn't see myself lining up for returns for this or any other show on this trip. There had to be another way to see Phèdre.

And there was ... and his name was Ian. Ian, a prince among concierges, works at the St Martin's Lane Hotel where I always stay when I am in London. He kept his eye on the National's website until he observed that one of the weekend days I had requested had transformed itself from sold-out black back to an orange colored link that spelled availability. He immediately picked up the phone and sped-dialed my room urging me to come down right away with my credit card in hand. Thankfully, the online transaction went without a hitch, and I had in my hand the hottest ticket in town, or at least the hottest ticket confirmation printout.

The rainy evening of the show, I took my umbrella and hailed a taxi right outside the hotel. The driver was interested to know what I was going to see at the National, and when I told him about my prized ticket, he was almost as excited as I was. We spent the rest of the short journey talking about the late Ted Hughes whose translation of Racine I was going to see that night, and the fact that some years ago Phèdre had been performed in this same translation with Diana Rigg in the title role.

Well, what was Phèdre like? Actually, a bit disappointing overall, but certainly no disaster. First the good news: Bob Crowley's brightly-lit setting was breathtaking: earthy rocks set against a gorgeous blue sky in a stage whose dimensions reminded one of a Cinemascope screen splashed with Technicolor hues. Nicholas Hytner's directed with a solid hand throughout, and the cast headed by Mirren, Dominic Cooper as her son Hippolytus, and veteran Margaret Tyzack as Oenone managed to create three-dimensional breathing human beings out of their classical roles.

The challenge of Phèdre for an English-speaking audience is the fact that the French theater of Racine's time maintained the classical unities of Greek drama. In effect, the great plays of Corneille and Racine are re-tellings of Greek myth, and are all written in the most sumptuous, wonderful verse. Unlike Elizabethan drama, no real dramatic action is shown onstage, and any violent act happens offstage and later on the audience is informed of it by a chorus-like character. This demands a unique gift for the spoken word from the author and acting of the highest order by the cast. In this production the acting is terrific, it is Ted Hughes's translation that appears to be at the root of the problem in this staging.

Though wonderful to read, Hughes's free verse translation, as opposed to Racine's gorgeous alexandrines, remains earth-bound when mounted on the stage. In the original, the poetic language catapults the play into the stratosphere, but in English no such starry journey seems to be possible. Our language just doesn't allow for a rhyming evening of tragic theater without the whole thing sounding alarmingly phony. French, of course, is another story. For instance, just compare the rhyming French of Racine to Hughes's translation:

HIPPOLYTUS
I have made my decision.
It is six months now
And there hasn't been one word of my father.
Somebody somewhere knows what happened to him.
Life here in Troezen is extremely pleasant
But I can't hang around doing nothing
With this uncertainty. My idleness makes me sweat.
I must find my father.

What is lacking in this production of Phèdre is just a hint of the beauty of the original French language. The slightest hint would have done it. Which leads us to the question, can English ever approximate the experience of watching this play in its native language? Probably not, but one can certainly hope that English-speaking poets will continue trying their hand at it.

I just found out that a new translation by British playwright Timberlake Wertenbaker, who grew up in the French basque country, will premiere at the Stratford Shakespeare Festival in Autumn of this year in what promises to be a very sexy production starring Seana McKenna.
Posted by Vincent Vargas at 4:39 PM