Un Ballo in Maschera at the ROH 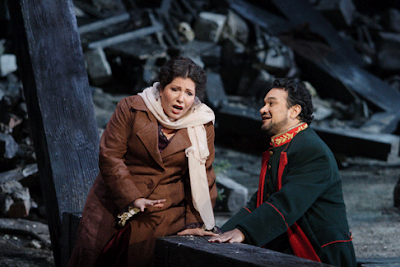 LONDON, UK -- The Royal Opera House, Covent Garden is having a winning summer season this year. Between performances of Tosca with Bryn Terfel's Scarpia ignating the stage, and Juan Diego Flórez singing his familiar Count Almaviva in "Barbieri," I managed to catch a performance of Giuseppe Verdi's Un Ballo in Maschera, featuring Ramón Vargas, Angela Marambio, and Dalibor Jenis.

It is not surprising that in the UK, a country with a monarchy, the American version set in Boston was performed. We rarely get to experience this version at the MET, and it always serves as a good opportunity to delve into that other "censored Ballo" forced upon Verdi by international assassinations occurring during the time that the opera was composed. Although I prefer when it is set in Denmark with King Gustavus, it is fun to catch the Boston setting even though some of the lyrics are laughable. Exactly which Massachusetts's "castello" did Riccardo steal from his enemy?

The ROH current Verdi productions are a mixed bag, as they are everywhere else in the world. Their mounting of Rigoletto, for instance, which I saw in February, reveals a gray, bleak Mantua where orgies are conducted nightly, and strewn garbage litter the dangerous streets. The current production of "Ballo" is decidedly prettier to look at, but it still presents us with a mixed bag of styles. We go from Ulrica's scary and appropriate pit, to Renato's empty house dominated by an unused hobby-horse, to a very memorable gallows scene (with some of the Rigoletto garbage making a cameo appearance), and we end up at the ball scene where designer Sergio Tramonti shows us what wonderful images can be conjured with a simple mirror: the effect is kaleidoscopic, conjuring up the world of M.C. Escher and thus showing us the dark labyrinthine paths that lead to a major political assassination.

The singing on Friday night was also decidedly mixed. Elena Manistina was an appropriately dark Ulrica and Anna Christy sang an Oscar that made the character a lot less annoying and quite endearing. Dalibor Jenis as Renato was a tale of two voices: his bottom dark ugly and wobbly, while his top revealing a grace, flexibility and beauty of tone that may reveal that this artist might have missed his calling as a heldentenor. Chilean soprano Angela Marambio sang the role of Amelia with huge lung power and at times little subtlety. As in the rest of the production, the voice was uneven throughout the evening, although her big voice when it settled was very thrilling to hear. Ramón Vargas sang with his usual Italianate style, giving the most satisfying performance of the evening. At the 4,000 seat Metropolitan his voice sounds small as it does in Row V of the Orchestra Stalls at Covent Garden which is half the size of the MET. It's not the hall, it is Mr. Vargas's voice, which lacks the heft to catapult him to the stratosphere of the greats. And yet, it is an instrument which serves this singer well in many different roles. Maurizio Benini conducted with style, at times bringing up sections of the orchestra that usually remain hidden in the fabric of the music.

I sat next to a Scottish gentleman who is good friends with John Boyle who directed the new production of Peter Grimes at the Metropolitan Opera. It was fun to talk about Grimes, Benjamin Britten, and the Suffolk Coast with him during the opera's two intervals. These days the luxury of having two intervals was in itself something to cheer about.
Posted by Vincent Vargas at 10:27 AM