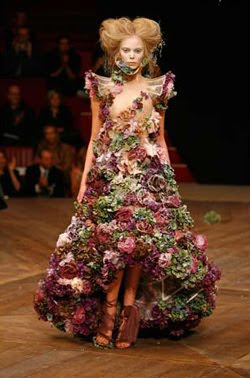 The Metropolitan Museum of Art in New York is enjoying more than a palpable hit this summer. The show Alexander McQueen - Savage Beauty has become one of the best attended exhibitions in the history of this institution. The retrospective of the meteoric career of the British fashion designer traces a decade that changed the world of fashion and earned McQueen international fame. It starts with his 1992 "Jack the Ripper Stalks his Victims" graduation fashion show from London's Central St. Martin's College of Art and Design, when his family and friends knew him as Lee McQueen, (influential British fashionista Isabella Blow suggested he use Alexander, his middle name, after she bought his entire first collection) and ends with McQueen's last complete show before his untimely suicide in 2010.

The exhibition, curated by Andrew Bolton, hits all the right points in establishing McQueen as more than just a fashion designer, but a visionary in tune with historical artistic movements and British socio-political concerns. Gallery after gallery we meet the many sides of a very complex artist not afraid to change styles even further than those dictated by the ever-changing whims of the fashion world. There's the Gothic McQueen, the primitive McQueen, as well as the exotic, naturalist, and nationalistic McQueen. But throughout all the different phases of the man, there are two constants that never waiver: an intense grounding in Romanticism as a point of departure for all his ideas, and solid craftsmanship skills learned while an apprentice at Anderson and Shephard, Gieves & Hawkes and other bespoke tailoring houses on Savile Row. The meeting point of a fervid imagination and spectacular couture is at the very heart of this exhibition, and the MET has done a terrific job not just collecting all the dresses together, but providing the appropriate lighting, ambiance and music (George Frideric Handel's Sarabande used in Stanley Kubrick's film Barry Lyndon and a haunting composition called "Disco Bloodbath" by Mekon are unforgettable) that makes us seem as if we are attending an actual McQueen runway show.

And then there are th 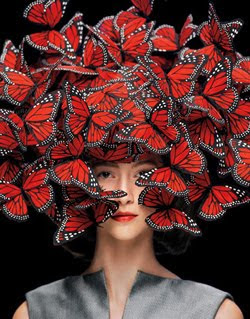 e accessories. The majority of the mannequins in the show are presented wearing appropriate headgear or masks fashioned by influential British hairstylist Guido Palau. These are essential to every single creation, and I would not dream of imagining this show without them. Unfortunately, the exhibition catalog, which does a very good job of capturing in photographs this show, fails to include any of them. Thankfully, the catalog does picture the amazing "butterfly hat" created by Philip Treacy for the "La Dame Bleue" Spring/Summer 2008 show as well as many other accessories that were key to the McQueen experience.

Whatever your interest or knowledge in the fashion world you are going to be impressed by how well this exhibition has been put together. What's more, you are going to come out with a greater appreciation for the world of haute couture. No doubt you will emerge from the show with some definite favorites in mind. You might be carried away by the incredible flower dress (pictured above) that McQueen created for the Spring/Summer 2007 show which he called "Sarabande." Or you might be totally fascinated by the dress made entirely of pheasant feathers for his "Widows of Culloden" collection a year earlier. Two impressive creations filled with a pervading sense of finality. From his Jack the Ripper collection to the very end, McQueen was not afraid to court Death throughout his career.

On my second visit to the exhibition I was fascinated by the hologram that concluded the "Widows of Culloden" show. Model Kate Moss appears out of the void, floating in space, wearing an incredible billowing dress of ivory silk and organza while the music of the film Schindler's List plays in the background. So brave and noble of McQueen to conclude his show in a celebration of Kate Moss as a fashion icon only months after the model had been involved in a drug scandal.

Here is the incredible finale to "The Widows of Culloden."

Posted by Vincent Vargas at 6:32 PM