Israeli Musicians to play at the Bayreuth Festival 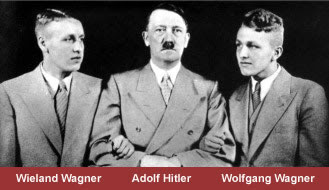 The following article appears through the courtesy of AFP News Agency:

Germany's 100th Richard Wagner opera festival kicked off here Monday in an edition that will include a taboo-busting performance by an Israeli orchestra.

The annual tribute to the works of the 19th-century composer, a fervent anti-Semite who later inspired Nazi leaders, will include for the first time a concert by musicians from Israel, which maintains an unwritten Wagner ban.

Audiences were keenly awaiting the opening performance of Tannhäuser, a romantic opera considered the seminal work of Wagner's younger years, but the Israel Chamber Orchestra's concert Tuesday was the hottest ticket in town.

The musicians are scheduled to perform Wagner's "Siegfried Idyll" during a concert otherwise dominated by works by Jewish composers including Gustav Mahler and Felix Mendelssohn.

Performances of Wagner's work are almost unheard of in Israel.

When Israeli-Argentine conductor Daniel Barenboim led the Berlin Staatskapelle in a performance of an excerpt from Tristan und Isolde in Jerusalem in 2001, dozens of audience members stormed out.

"He (Barenboim) indicated to those who wanted to leave to do so but at the same time, the orchestra was ready to play for those who chose to stay," he told AFP.

"Thirty or forty people left, some of them shouting and cursing and slamming the doors. The rest stayed and gave a standing ovation at the end."

Ten years on, the Israeli concert is not part of the official Bayreuth Festival program but it has nonetheless set some tempers flaring.

"The decision of the Israel Chamber Orchestra sadly represents an act of moral failure and a disgraceful abandonment of solidarity with those who suffered unspeakable horrors by the purveyors of Wagner's banner," said Elan Steinberg, vice president of the American Gathering of Holocaust Survivors and their Descendants.

"Nobody suggests that Wagner's music not be played. But the public Jewish refusal to do so was a powerful message of indignation to the world that exposed Wagner's odious anti-Semitic ideas and those who championed them."

The city of Bayreuth and the Wagner family, which notoriously courted Nazi leader Adolf Hitler, are meanwhile trying to break with the past.

Bayreuth plans to start a Jewish cultural centre while Katharina Wagner, the 32-year-old great-granddaughter of the composer and co-director of the festival, has pledged to open the family archives revealing the extent of her ancestors' entanglement with the Nazis.

Felix Gothart, a leader of the Bayreuth Jewish community, which now has about 500 members, twice the number in 1933 when Hitler came to power, was also critical of the decision to invite the Israeli musicians to play this year.

"As soon as a single person was offended by the fact that Wagner is being played by Jews in Germany it would have been better to keep a lower profile," he told AFP.

However the president of Israel's fledgling Wagner society said he was delighted that an Israeli orchestra would be performing in Bayreuth, saying it could represent a new beginning.

"I hope that the concert will mark a new step towards the lifting of the taboo in Israel against Wagner, one of the principal composers of the 19th century, and that he will soon by performed freely in our country," Jonathan Livni said.
The Bayreuth Festival runs to August 28.
Posted by Vincent Vargas at 1:22 PM