A memorable Lohengrin at Bayreuth 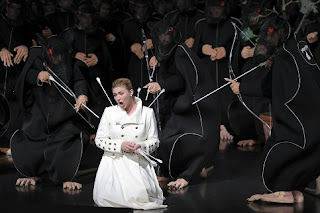 There were multiple curtain calls at the end, and when Mr. Vogt appeared that ignited the house into my first Bayreuth standing ovation.  When the audience at the Green Hill likes a performance it is as if an explosion occurs.  It was very exciting to be there and experience this.
Posted by Vincent Vargas at 1:51 AM