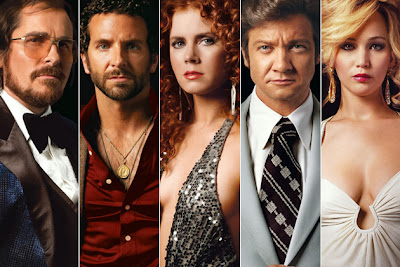 In David O. Russell's American Hustle, a recreation of the Abscam scandal: an F.B.I. sting operation that led to the arrest of several members of Congress, the American Dream has transformed into the more complex Great American Con Game, and everybody seems to be in on the act. Set in the 1970s, a decade of wild excess, marked by big hair, superfluous jewelry, and the apotheosis of Rock, we are in the world of the grift where a Mexican-American from Tucson can successfully impersonate a Sheik from Abu Dhabi, and an American stripper can pass off as a British aristocrat.

Christian Bale, fifty pounds overweight and with a horrible comb-over, plays con-man Irving Rosenfeld who befriends ex-stripper, Cosmopolitan magazine employee Sydney Prosser (Amy Adams). Soon they become romantically entangled despite the fact that Irving is married to Rosalyn (Jennifer Lawrence), and the couple has a son. Into this unsettling triangle comes undercover F.B.I. agent Richie DiMaso (Bradley Cooper), who catches Irving and Sydney in a scam, and since he is attracted to Sydney, promises to set them both free if the couple helps him take down four other scam artists. Soon the plan develops into a complex, dangerous scheme involving the mayor of Camden, New Jersey, Carmine Polito (Jeremy Renner), plans to bring gambling to Atlantic City, and the participation of Miami mafiosi headed by Meyer Lanski's under-boss Victor Tellegio (an uncredited Robert De Niro).

With its underworld characters and noirish ambiance, right from the initial scene, as we watch Christian Bale's Irving attempt to hide his baldness with a miserable-looking rug, the film successfully descends into a world of fabrication and counterfeit, setting the tone for the double and triple-crosses that are to follow. The performances by the principle actors are quite excellent, although Mr. Bale has revealed that most of his lines were improvised. The entire film, with its complex script by the director and Eric Warren Singer aims high when it comes to Oscar potential, although in interviews, director Russell also confessed to rewriting Mr. Singer's script extensively, and admitted that he was more interested in the performances and characterizations than in the plot.

American Hustle is a very entertaining film, with brilliant performances, some of which promise to be big winners in the upcoming award ceremonies.
Posted by Vincent Vargas at 3:20 PM