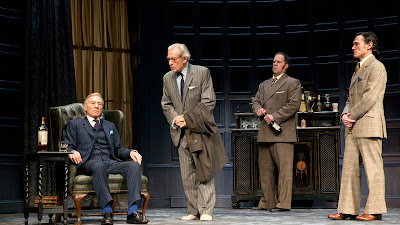 No Man's Land is Harold Pinter's 1975 play, first produced at the National Theatre of Great Britain, with a stellar cast featuring John Gielgud and Ralph Richardson. The play is pure Pinter in its use of calculated silences, enigmatic characters, a lack of any real plot, and a frightening sense of danger lurking inside the psyche of every one of these damaged characters; a situation which can resort to violence at any time. Structurally, the flow of the two acts is reminiscent of the great post-war "Theatre of the Absurd" plays of Eugene Ionesco, early Edward Albee, and Samuel Beckett, whose Waiting for Godot is playing in repertory with this production of Pinter's drama. Ian McKellen and Patrick Stewart are taking the lead roles, and Tony Award winners Billy Crudup and Shuler Hensley complete the casts.

Comparing the 1975 cast to the present one, in the role of Spooner, John Gielgud was a foppish character of Chaplinesque pathos. Ian McKellen turns him into a literary but raggedy scarecrow that has been left too long out in a field. Hirst was an over-the-top, aristocratic drunk, awash in memories and dementia: perfect for the unique theatrical persona embodied by the talented Ralph Richardson. Patrick Stewart, lacking the physical presence and demented bravura of Sir Ralph, plays the role with a certain amount of frailty, even sitting down stiffly and uncomfortably in his big chair. Since Mr. Stewart is remarkably fit and looks quite young for his years, it is a testament to his acting abilities that he carries off the part with so much conviction.

Mr. Crudup and Mr. Hensley bring a real sense of menace to their respective roles of Foster and Briggs (all four characters are named after famous Cricket players). In typical Pinter fashion, it is unclear what their roles are in this household.  Is the young Foster merely Hirst's amanuensis? Is the brutish Briggs just a servant and bodyguard? Are the pair conspiring to lead Hirst to oblivion with alcohol? Do they sense that Spooner might be a danger to their plan? Are they lovers? In typical Pinter fashion, the playwright refuses to provide concrete answers.

As in Beckett's work, these four characters are stuck in a no man's land each one has built for himself. It is a place, which according to Spooner, "never moves...never changes, which never grows older, but which remains forever icy and silent." If the play is about the reaction of a dysfunctional household to an intruder, and the possibility that this person might awaken the other from his lethargic, alcohol-soaked existence, then the play strikes a chord of genuine theatrical discovery, and the trip to this icy, silent no man's land is quite gratifying.
Posted by Vincent Vargas at 8:50 AM