Farinelli and the King on Broadway 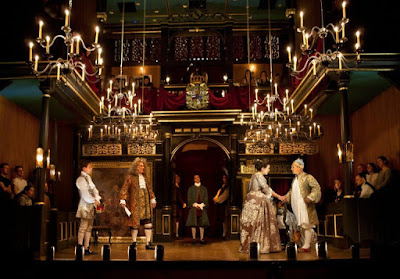 All hail Mark Rylance!  Four years after his star turn in repertory performances of Olivia in Twelfth Night and the title character in Richard III, he is back at the Belasco theatre in Farinelli and the King, a new play written by his wife, Claire Van Kampen, which first played to critical and audience praises in London at the Globe theatre.

Mr. Rylance plays Philippe V, an 18th century Spanish monarch who has descended into madness. Farinelli is, of course, he famed singer who was castrated at the age of ten becoming the leading "primo uomo" of 18th century operatic London.  Once he became the king's favorite, however, he never returned to Covent Garden, or any other operatic stage, much to the chagrin of his manager and audiences of the time.  The play explores the relationship between the king and his castrato, delving into issues of favoritism and politics, as well as themes of madness, and the way that music can result to be the magic antidote that cures the ills of a politically damaged world. 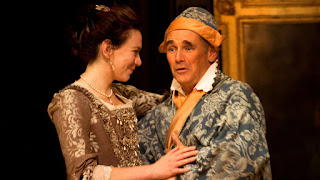 Every time that Mr. Rylance has stepped on a Broadway stage he has received critical and audience acclaim which has led to multiple Tony award wins.  Here he is poised to repeat this feat.  His performance is deep, multifaceted, hilarious and heartbreaking at times.  You simply cannot take his eyes off him!  And even though there is a familiarity in his voice from performances past, his skill at shaping a character with a simplicity of movement and a turn of the phrase catapults him into one of the greats of our time.

One of the chief pleasures of attending this play is the clever set design by Jonathan Fensom, who has transformed the Belasco into a courtly theater with onstage seating for the audience.  This together with Paul Russell's lighting design, which include real candles, makes a welcoming, warm setting.

Throughout the play, and even before the non-curtain goes up, live music by baroque instruments lead us into the world of the baroque.  When Farinelli is asked to sing, Mr. Crane steps aside, and a countertenor steps into the role to deliver some of the great Georg Frideric Handel arias.  During the matinee performance yesterday afternoon, countertenor James Hall filled the Belasco theater with his unique voice.

Once again, New York is lucky to be hosting one of the great actors of our time, in a very interesting, charming play.
Posted by Vincent Vargas at 1:51 PM