La Bohème: Paris, We Have a Problem 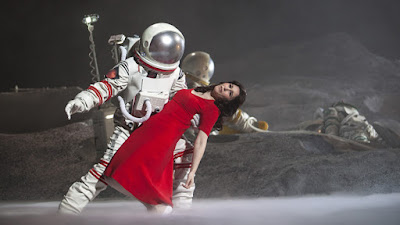 The new production of Giacomo Puccini's La Bohème at the Opéra National de Paris takes place one hundred years from now, in a spaceship, and on the surface of the moon.  Claus Guth's take on this beloved classic stems from the work's libretto itself.  Colline, the bohemian philosopher mentions the Apocalypse, and I'm sure this set the German director's mind into imagining the opera as being set during a doomed space voyage, where the majority of the action is a remembrance of things past.

If you are going to set La Bohème in space, then this is the only way to proceed given the fact that Puccini's story does not really lend itself for abstraction easily.  So, four astronauts are running out of air on a doomed spaceship, how do you explain the landlord Benoit's visit asking for their rent?  That's easy, Benoit is a member of the crew who has already died.  One of the bohemians, er...astronauts play with his limp body like a marionette, as if he were alive, and they sing his lines.  What about Mimì?  Where does she come from?  She is in the mind of Rodolfo.  She appears in a beautiful red dress, revealing that Rodolfo must be in dire need of feminine companionship after being cooped up in space.   All this, plus a few stolen ideas from Stanley Kubrick (2001, A Space Odyssey), Andrei Tarkovski (Solaris), and even a mime who looks as if he just stepped out of Federico Fellini's 8½ fills out the evening.

What a mess!  At Bayreuth, at least they wait until the end of the act to boo, but at the Opéra a storm of loud ferocious catcalls greeted Act III, where instead of the familiar Parisian Gate of Hell, we found ourselves in the middle of the lunar surface.

I'll say this in defense of Herr Guth's vision: it looks really beautiful!  The spaceship set has all the melancholy of 2001's Jupiter Mission sequence, but unfortunately there's no HAL to make things more interesting.

Venezuelan conductor Gustavo Dudamel led a beautiful reading of the score, never overwhelming his talented singers.  Led by the Rodolfo of Atalla Ayan, and the Mimì of Nicole Car, the cast seemed surprisingly comfortable with the staging.

Maybe some operas should never be updated.  And if they are, there's has to be a better idea than this half-baked disaster.
Posted by Vincent Vargas at 10:02 PM