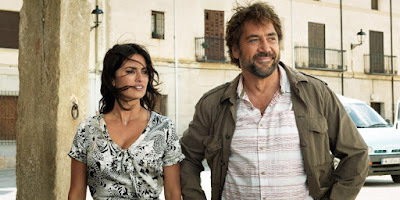 Homecomings are dangerous. From ancient Greek tragedy we know that a return home after many years can stir dormant emotions and bring forth forgotten grudges to the surface that often culminate in dire events. So it is with Asghar Farhadi’s latest film Everybody Knows (Todos lo saben). Away from his native Iran, where his films have won the Oscar twice (A Separation and The Salesman), the writer/director has crafted an intricate story about a kidnapping in a Spanish town that seems to be an indictment of Old World values and deep resentments that are triggered by a visit from America.

Laura (Penélope Cruz) arrives home from Argentina with her two children sans her husband. The occasion for her return is a family wedding, where in the middle of the festivities her impetuous teenage daughter is kidnapped. The wedding sequence, crafted as carefully as that of The Godfather or The Deer Hunter, serves to introduce the relationships in this family. We learn that Paco (Javier Bardem) was in love with Laura, and that he now owns the vineyards that once belonged to her family, an important plot point.

The wedding sequence is a masterpiece of exposition, economic in its development and festive in its crafting. Perhaps the highlight of the film, and arguably its strongest section. Once the kidnapping occurs, sending the film to its second act, the narrative slows down, turning the plot into a ponderous whodunnit instead of speeding up the action and racing towards a completion. Farhadi relies too much on the emotional toll the kidnapping produces on the characters, when instead he should be offering the audience more clues and fewer red herrings. The eventual result is that the final resolution leaves us a bit cold.

Although the middle section of the film could have used an editor's firm hand, the final sequence shows a master filmmaker in complete control of his craft. As one of the characters prepares to reveal to another the identity of the kidnappers, the sanitation service is hosing down the main square of the village, the strong gush of water making the streets clean once again. Even the crucifix in the middle of the plaza gets a good scrubbing. Is the town now going to be cleansed of its past sins?  Of course not, this is the Old World. It'll just get dirty once more: everybody knows that!
Posted by Vincent Vargas at 5:14 PM