US: the new Jordan Peele film 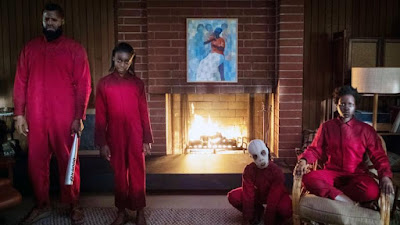 One is not sure what Jordan Peele wants to be: a social critic, or a scare meister? Thus far he has been able to blend the two with genuine success. In his first film, Get Out, a young black man witnesses first hand a monstrous side of bigoted white America. In Us, his second film, he tackles the theme of the doppelgänger in a terrifying story that begins during an equally terrifying time in America: Ronald Reagan's presidency and the "Hands Across America" benefit event. In 1986 young little Adelaide encounters a doppelgänger of herself at a funhouse in Santa Cruz beach. Years later, she's now a married adult, and along with her two children and her husband, she heads to Santa Cruz on vacation, even though the trip is making her apprehensive since she has not forgotten the traumatic event of her childhood that happened there.

One evening, the family is visited by doppelgängers of themselves: scary creatures dressed in red overalls, and wielding sharp golden scissors, their voices monstrous shrieks, and unintelligent grunts. These visitors might look like the family, but they are many rungs down the evolutionary and social scale. The trailer for this film seemed to suggest that the film was a condemnation of black versus black violence, but when an upper-class white family is savagely murdered by equally deranged doppelgängers, the film begins to suggest a social war rather than a racial one. The have-nots finally getting the upper-hand on the economically advantaged.

But Mr. Peele makes sure that there are more layers to the story than just an economic slasher nightmare. He conveys information that there are hundreds, perhaps thousands of abandoned tunnels running through the United States. Obviously tunnels that hold great secrets, places that will eventually be revealed and shed light on the meaning of the rows of caged rabbits that we see during the film's credit sequence.

One thing's for sure: the cast, headed by the luminous Lupita Nyong'o shines. Playing their own doppelgängers both she and her husband Gabe (Winston Duke) relish their dual roles. Likewise Elizabeth Moss and Tim Heidecker, who play their friends Kitty and Josh, pull all the stops playing their fiendish counterparts.

At the showing I attended, I heard a lady comment after the film concluded that she knew there was a message to the film, but she was not sure what it was. I fear this will be the opinion of one too many viewers of this film. These viewers will instead focus and enjoy the roller coaster ride the director offers. The film is more successful as a creature feature than as an economic satire.

Jeffrey Anderson in Common Sense Media summed it all up this way: "Jordan Peele's horror shocker can't compete with its sensational predecessor Get Out, but it doesn't have to."
Posted by Vincent Vargas at 8:47 PM