30 year-old "Meistersinger" returns to the MET 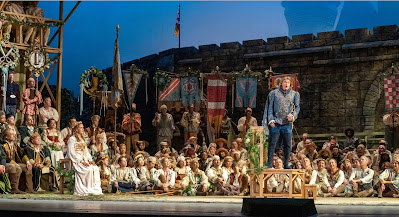 The month of November saw the Metropolitan Opera stage a revival of their 30 year-old production of Richard Wagner's Die Meistersinger von Nürnberg. This decision created a unique event in the world of opera. Here in the year 2021, when "Regietheatre" has become the norm, even on these shores, the MET dared to mount a production completely devoid of any agenda or director-driven point of view: the norm on the great operatic stages around the world these days. Nowhere to be found on the MET stage was the Lilliputian world that director Stefan Herheim created for his 2013 staging of this work at the Salzburg Festival. And certainly, the MET was staying clear of the World War II political treatise of Barrie Kosky's Bayreuth staging, with its exploration of the inherent antisemitism prevalent in the work.

The MET staging, which played its last performance this season on Sunday (and which might be the last time this production is staged), is an epic imagining of this work created at a time when this opera company envisioned each staging in its repertory to last the minimum of twenty years. It was the way the MET operated under Joseph Volpe, who ran the institution from 1990 to 2006. Thus, Günther Schneider-Siemssen's beautiful sets might have cost a lot of money, but the institution would get it all back in those twenty years. Little did the creators of this production envision that thirty years down the road the MET would still be presenting their work. The only creators who remain alive are director Otto Schenk and choreographer Carmen De Lavallade, both in their 90's.

But why is this production still being mounted in a world-class opera company when similar institutions are experimenting with newer styles that break traditional stagings? The answer lies in the very fact that the New York opera audience is essentially a conservative one, resistant to watching their favorite operas in newer, more daring stagings. The Stefan Herheim production almost made it to the MET, but at the last moment that idea was scrapped, and the old production remained.

What audiences saw this November was a return to a simpler world of opera, where the composer still ruled, and where the director's job involved nothing more than the recreation of the vision of the composer. What the MET did do is populate these old sets with some of the great Wagnerian artists available today. All of them European, most of them German, and the large majority veterans of many summers at the Bayreuth Festival. Here was Klaus Florian Vogt, that amazing tenor with the sweet, youthful voice -- offering a clear antidote to Jonas Kaufmann's baritonal fach. There was also Michael Volle, who clearly owns the role of Hans Sachs at the moment, with his intelligent, humanistic approach to this wise character. There was also Johannes Martin Kränzle who, in my opeinion, can't be beat in the role of Sixtus Beckmesser, whether he is wearing a Jew's head in Mr. Kosky's current production at the Green Hill, or in this production which showcases his great comedic skills. And let's not forget Georg Zeppenfeld who belongs in the same league as René Pape when it comes to interpreting the great Wagner bass roles.

But the drawing card to this revival was soprano Lise Davidsen who continues her meteoric rise in the opera world. What a voice, and what a season she will have at the MET! Upcoming performances include two soprano roles in Richard Strauss's operas: the title role in Ariadne auf Naxos and Chrysothemis in Elektra. Antonio Pappano conducted this mighty work with a sure hand, letting the orchestra show off its brilliant playing. His reading was transparent rather than pompous. His reading of the third act prelude was one of the most beautiful I have ever heard in any opera house.

It was a great pleasure to see this staging once more, but, as gorgeous and intelligent as this production might be, let's face it: I think we are all ready to see a new MET Meistersinger soon.

Posted by Vincent Vargas at 9:03 PM