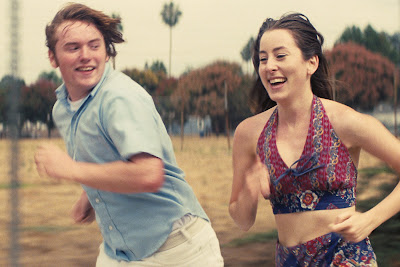 I was there. Well, not exactly there, because Licorice Pizza, Paul Thomas Anderson's latest film is so SoCal that even its title, the name of a record store chain during the director's youth, has to be explained to someone like me whose memory of the 1970's means remembering (or forgetting) the gritty urban decay of New York, complete with graffiti-filled subways and dangerous city sectors.

I saw this film in 70mm at the Village East theater, a landmark building that presented Yiddish entertainment at the beginning of the century. Very few people will be able to tell you who played this house. I noticed the young crowd around me that gathered to see this movie, and I realized that even fewer had any clear memory of the 1970's. And yet, PT Anderson's film, filled with such loving nostalgia for days gone by, his days gone by, resonated with this young audience. The director presented a very personal story, but he also knows that if you grew up at the turn of the century in New York's Jewish ghetto, or in the Taxi Driver New York blight, or in any other decade, or any place on Earth, one thing is certain: everyone goes through adolescence and everyone falls in love. That is the simple reality and universal theme of this film.

So, the director's approach is to mine his memory banks. Episodes of his life are beautifully recreated, focusing on a young 15 year-old high school student and child actor Gary Valentine (Cooper Hoffman) and his pursuit of Alana Kane (Alana Haim), a twenty-something who eventually becomes his business partner and main squeeze. Together, they travel the landscape of Southern California at a time when prices were so low that a high school kid could open a water bed store and sell one to Jon Peters (a hilarious Bradley Cooper) during the time the ex-hairdresser turned producer was dating Barbra Streisand.

In PT Anderson's coming-of-age enchantment, Old Hollywood is still hanging on as the new lions are storming the gates. We don't get a glimpse of Stephen Spielberg or George Lucas in this film, but figures like Jack Holden (Sean Penn as William Holden), and Rex Blau (Tom Waits as an aging film director -- a John Huston / John Ford composite), play memorable parts in this film. The movie is also filled with cameos. Blink and you'll miss John C. Reilly, a PT Anderson stalwart, as Herman Munster. But you won't forget Christine Ebersole as a Lucille Ball-like character who beats up Gary after he commits a faux-pas on live TV.

The San Fernando Valley has never been portrayed so charming before. Especially during the gas shortage sequence, when Gary runs past lines of cars to the tune of David Bowie's "Life on Mars?" In this film we find a softer PT Anderson. Boogie Nights, Magnolia, and The Master were tough subjects, and his scalpel had to be sharper and cut deeper. Here, the director's main prop is his camera (he takes the DP credit for the first time), and it seems that his main concerns are to present a rosy recreation of his coming-of-age years, and to make sure Cooper Hoffman and Alana Kane come out of this as bright new Hollywood stars. Not a bad reason to create this film. Cooper's dad, the late Philip Seymour Hoffman had a long association with PT Anderson, the actor giving some of his best, defining performances under this director's lens. Now is the time for a new generation to spring forward, as the director turns his gaze back to the past.

Posted by Vincent Vargas at 8:39 AM