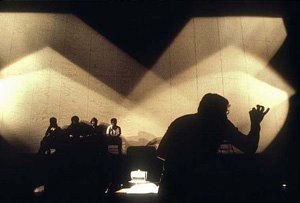 The recent Peter Gelb news conferences have brought on many conversations about imminent winds of change that promise to swirl about the Metropolitan Opera. During a conversation I had at work with one of my colleagues, he wondered what the MET would be like these days if the brilliant Swedish empressario and director Goeran Gentele had not died so tragically right as he was starting his tenure in New York City. This, together with the above photograph of Leonard Bernstein conducting a vocal rehearsal of Carmen in 1972, inspired the following post.

The Goeran Gentele Revolution ended abruptly when he was killed in an automobile accident in July of 1972. Mr. Gentele had assumed leadership of the Metropolitan Opera after Sir Rudolph Bing's retirement. He had only been at the helm of the opera house for a few short weeks. His brilliant production of Carmen with James McCracken and Marilyn Horne, conducted by Leonard Bernstein became his posthumous legacy to the Metropolitan Opera. It was an amazing, abstract re-thinking of Bizet's work (with monumental bare white walls and blinding light) that shifted the focus of the work to Don José, away from the title character and, in doing so, brought a sense of doom to a work that had grown stale with endless repetition. On the musical side, Mr. Bernstein's tempi were the slowest one ever associated with this work, resulting in a score that sounded noble and filled with doom, instead of a collection of well-known, often-played arias and ensembles. A recording of this production is available from Deutsche Grammophon.

The Schuyler Chapin, and Anthony Bliss tenures led to the Joseph Volpe Era. Personally, it is hard to imagine this Carmen production under the present leadership. In the years that Mr. Volpe has led the MET, his creative eye grew to be more expensive, while at the same time his vision shrunk down to become more conservative. The MET thrived financially for some years, but after the events of the eleventh of September empty seats became the norm. Somewhere along the line, the MET ceased to become the place to be when it came to innovation, and this is the sad legacy that Mr. Volpe leaves behind. The unkindest cut of all was that Mr. Gentele's work was replaced by Franco Zeffirelli's current production, which has all the intimacy of Ringling Brothers.

Goeran Gentele is known to have said that "Opera is an 18th and 19th century art that must find a 20th century audience." I certainly hope that Mr. Gelb shares this opinion, and that he is able to lead the MET into the 21st century.

Posted by Vincent Vargas at 2:46 PM