This'll get'em in, by George! 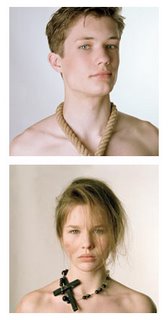 The English National Opera has been advertising their current season at the London Colisseum with plenty of captivatingly sexy images these days. Pictured on the top left is an image from the Billy Budd ad, and below an image for Dialogues of the Carmelites. In the hopes of dusting the cobwebs suggested by the word opera, the ENO's advertising campaign reveals a sleek world where the lyric theater promises to meet trendy London. The new ad campaign is designed to lure in members of Generation X and Y, Baby Busters, Yuppies, and Bobos who, up to now, have stayed away in droves from opera.

Across the Pond, the New York City Opera, among others, has also adopted similar ad campaigns to get the young people in. And although they have not been using flesh to fill seats, little tricks such as listing repertory using one word "hip" titles (Butterfly, Figaro) often appear in their advertising.

As the Metropolitan Opera prepares to welcome Peter Gelb, we are reminded that the MET has plans to replace the current Madama Butterfly production with the current smash hit at the ENO which has been helmed by superstar film director Anthony Minghella (The English Patient, The Talented Mr. Ripley). I am sure that as Mr. Gelb becomes entrenched in his new post at the MET that this is the style of advertising that will begin to appear to compliment the new productions that will be filling future repertory.
Posted by Vincent Vargas at 2:26 PM

Michigan Opera Theatre pulled this advertising trick too - it tends to backfire more often than not, since the "emoting" that the models is do is substandard at best. The Baltimore Opera used ot do a great series of radio promos which could easily be played on rock radio, they were so well crafted...I have always wanted to know who the ad agency was.

In the end, the images presented in order to advertize the opera have very little to do with the productions themselves.