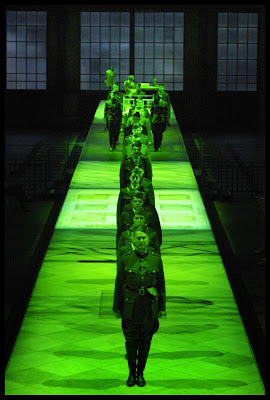 Two amazing things happened at the Park Avenue Armory this evening. The first was that nobody around me walked out of the incredible staging of Die Soldaten, a complex, 12-tone serial opera by composer Bernd Alois Zimmermann: the kind of work that would usually have them walking up the aisles even before the intermission. The second amazing thing was that there was not a single cough heard in the house during the entire length of the work. If this opera would have been staged at a venue like the MET, let's say, a good number of the audience would not have returned for Act II, and the chorus of coughs would have been deafening.

The improved audience behavior I experienced tonight is the result of taking a knowledgeable opera audience, removing them from the warm confines of a proscenium theater, and throwing them into an alternative barn-like space for the ride of their lives -- literally. Sitting on motorized platforms, the audience travels up and down the length of a t-bar stage. This is an incredibly brilliant staging that eliminates the distance between performers and audience. The 110-piece orchestra sits on the left, while across from them a smaller satellite percussion "banda" contributed to the stereophonic effect. The singers were miked, of course, due to the size of the space. But given the fortissimos that composer Zimmermann achieved in his score, those microphones really came in handy for the cast. Thankfully, the enhanced sound felt quite natural and unobtrusive.

I am a newcomer to this work and to its composer, but I am no stranger to Schoenberg's Moses und Aron, and Alban Berg's Wozzeck and Lulu, the other seminal works of the 12-tone musical period. Die Soldaten might have been new to me, but I was familiar with its musical terrain. Let's just say that the dissonances did not disappoint. It was one of the most exciting and dense writing I have heard, rivaling the best moment of the better known serial composers. Schoenberg's musical invention was supposed to revolutionize German and world music. However, like Hitler's one thousand year Reich, Schoenberg's musical empire crumbled as a result of its inherent monolithic approach. As a matter of fact, by the time that Bernd Alois Zimmermann started working on the first version of this work in 1957, serialism was no longer avant-garde, and the Cologne Opera rejected the work as unplayable. The same accusations that were hurled at the score of Wagner's Tristan und Isolde a century earlier.

Die Soldaten might not have the classical structure of Wozzeck, or the mathematical precision of Moses und Aron, but it is brilliantly orchestrated, and Zimmermann never runs out of musical inventions. The prelude and the last scene, in particular the very last chord, are instances of sheer virtuoso writing.

This is one of those productions that New Yorkers will talk about for years. I am happy that Die Soldaten has led the way for the Park Avenue Armory to become a venue for challenging 20th century opera. The next operatic work to be staged at this space will be Oliver Messiaen's Saint François D'Assise, which will be presented in mid December. This is a truly wonderful way to celebrate the anniversary of Messiaen's 100th birthday.

You have one more chance to see this production of Die Soldaten (July 12): don't miss it!
Posted by Vincent Vargas at 10:55 PM