Parsifal at Bayreuth: Calling All Angels 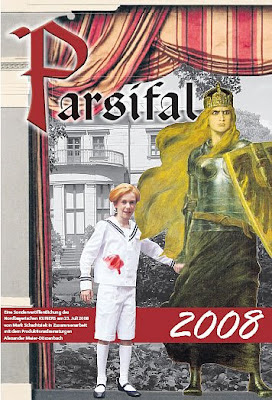 As I listen to Robert Dean Smith and Iréne Theorin (singing beautifully with a cold!) ignite the Bayreuth Festival in Tristan und Isolde, I would like to post some information about yesterday's new production of Parsifal.

A big reason why WagnerOperas exists is due to a large part to my interest towards the Christoph Schlingensief production of Parsifal that has been replaced this year. That production was perhaps the most controversial that Bayreuth ever witnessed, and year after year it was booed so riotously that the performers must have felt some kind of indignation towards the audience. Of course, as Alex Ross music critic of The New Yorker noted in his initial review of this production back in 2004 that's exactly the kind of thing that the director was aiming for in the first place: "the provocateur will always have the upper hand against the provoked. 'If my enemies shout ‘boo’ at the première, then all is in order,' Schlingensief (said). Indeed, when the curtain fell, the audience responded with the loudest, lustiest boos I’ve heard outside of Yankee Stadium. Less than a third of the audience applauded when Schlingensief took his bow. In other words, a triumph."

Now the Schlingensief production is history, and it has been replaced with a new staging from Norwegian director Stefan Herheim. I know little about him, except that his background is both musical and theatrical: he studied the cello in his youth, and later toured Norway and Germany with his own puppet theater. His concept for this production (as best as I can tell from the pictures and from the reviews and interviews) is a kind of time travel through the history of Germany, starting at Wahnfried and ending in the rubble of the Reichstag after World War II.

As you examine the photographs of this production you will also find many winged characters. Most notably, Kundry, sung by Mihoko Fujimura, is dressed like Marlene Dietrich, straight from the film Morocco, complete with top hat and tails. The addition of a huge pair of wings on her back however is more reminiscent of Bruno Ganz in Wim Wenders's great film Wings of Desire.

In a recent interview, Herheim promised that his vision of Parsifal would be controversial. Perhaps, but you couldn't tell from the opening night audience reaction. After the first act there was only one person booing, and he was rapidly out-shouted by roars of applause, cheers, and bravos. As the evening continued, the loud approvals became even more evident. Whatever the critics think of this Parsifal, the audience seemed to love it. Of course, after three years of Schlingensief's images of rotting bunnies and African tribes the mainly conservative audience at Bayreuth is prepared for anything. This production even has a grail: of course they're going to like it!

And for such an expansive cavalcade through German history and culture, who better to conduct the Bayreuth orchestra than Daniele Gatti, whose lush reading of the score almost forced time to stand still, bending tempi every which way possible, and offering perhaps the most Italianate reading since Arturo Toscanini was invited to conduct the festival back in the early 1930's.

I hope you have a chance to listen to a rebroadcast of the performance, or better yet, if you are lucky, I hope you get a chance to see it at Bayreuth. Do let me know what you think of this new production.
Posted by Vincent Vargas at 12:56 PM