Melancholia by Lars von Trier at the NY Film Festival 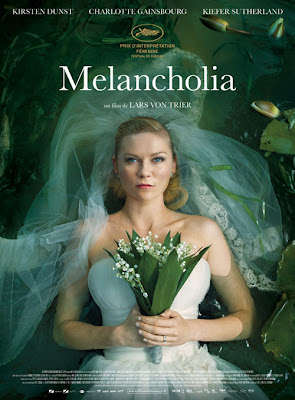 Little remains of DOGME95 in the current films issuing from the mind of Danish film director Lars von Trier. In his latest, Melancholia, a trace of the Danish manifesto manages to surface in the quirky hand held camera ever-present in the majority of the film, and in the jagged jump cut editing style that, in reality, owes more to the French New Wave than to the ten commandments of the rigid film manifesto with which Mr. von Trier came to prominence. The most impressive sequences in the film break every rule of the manifesto of von Trier's youth by presenting us with a series of visually stunning, slow-motion scenes of a bride on the brink of a deep depression as a rogue planet heads towards a collision course with Earth. We are a long way from Dogma here. There's even lots of computer generated images and the name of the director is emblazoned above the film's title.

This inevitable interplanetary crash can now be seen as a metaphor for Mr. von Trier's recent escapades. At this year's Cannes Film Festival, Melancholia took center stage as a result of Mr. Von Trier's wrecking ball behavior and his comments about Nazism. At the screening of the film this week at the New York Film Festival, the absent von Trier sent an e-mail to the Film Society of Lincoln Center stating that in the future he will no longer be giving any press conferences. If he keeps his promise, this is a good decision. Many times he fails to recognize that his films speak for themselves, and that no show-biz shenanigans are needed to supplement what to this moment has been a uniquely successful career. Artistically and stylistically he is one of the great talents in world cinema, and many feel that with Melancholia he might have reached the zenith of his career.

Melancholia begins with an amazing tour-de-force prologue featuring scenes reminiscent of Alain Resnais's Last Year at Marienbad to Stanley Kubrick's 2001, A Space Odyssey. While the soundtrack plays Richard Wagner's prelude to Tristan und Isolde we see images of irrepressible beauty, and surreal splendor that introduce us to Justine, played by Kirsten Dunst, who gets married while in the throes of a deep depression as we see a planet called Melancholia approaching and ultimately colliding with planet Earth. In essence, the prelude offers us a complete film in the same way that Wagner's prelude is a musical encapsulation of his entire opera, or how the "News on the March" documentary that begins Orson Welles's Citizen Kane offers a miniature version of the story that will follow. But it takes Richard Wagner many hours to resolve the harmonic conflict that he sets up with the famous "Tristan chord" in the third measure of his score. It is not until many hours later that his music resolves itself into a crescendo of tonality, very much the process of Mr. von Trier's film which ends with an apocalyptic crescendo reminding us of Wagner's other work, the end of the world opus, Götterdämmerung.

The nucleus of Melancholia is structured in two acts. The first, labeled "Justine," is devoted to a disastrous wedding reception, the length of which makes the interminable wedding scenes of The Deer Hunter appear the length of a freeze frame, but which feature incredible performances by the likes of John Hurt, Kiefer Sutherland, and Charlotte Rampling, who play the most salient characters of Justine highly dysfunctional family. The second half, called "Claire," named after Justine's sister played by Charlotte Gainsbourg, develops the mental landscape of several of the main characters while focusing on Justine's descent into the kind of madness where we realize that the impending interplanetary cataclysm might just all be in her mind.

Melancholia is a long and tedious film filled with sumptuous imagery that harbors an empty nihilistic core at its center. And although most of the performances are memorable (especially Ms. Dunst and Ms. Gainsbourg) we fail to connect with very few of its characters at any level.

Ultimately, I recommend the film because of its deliriously beautiful imagery coupled with a very impressive use of music. In addition, Lars von Trier is a serious artist, and any new work of his ought to be experienced. Here is an artist who has never sold out to popular tastes or become commonplace. You may not understand all of Melancholia (I don't think anyone, including von Trier does) but it will make you think beyond the proverbial box where Hollywood persists on trapping us.
Posted by Vincent Vargas at 11:05 AM