Faust: Clowning Around in Salzburg 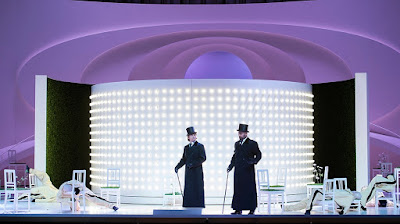 At the center of the first and the last scenes of Charles Gounod's opera Faust. as seen through the wacky lens of director and set designer Reinhard von der Thannen, a sign of the French word "Rien," meaning nothing, descends lazily from the rafters. And after watching the telecast from the Salzburg Festival of this new production I wonder if ultimately "nothing" is what the director wants his audience to take away with them.

One stays with this production out of curiosity to see what von der Thannen is going to come up with next. As soon as the curtain goes up we get a clown Faust, and in the next scene a clown chorus, establishing, perhaps, a carnival atmosphere. But in the second act the picaresque ambience is broken by a gigantic skeleton hovering over the Soldier's chorus (obviously an anti war statement), and gigantic black balls (the kind that King Kong might use in a bowling game) are rolled around the stage during Margerithe's most poignant moments. What does it all mean? 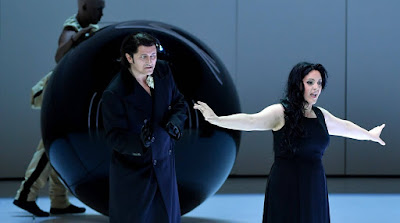 We must remember that Mr. von der Thannen was also the set and costume designer for the infamous Hans Neuenfels rat infested production of Richard Wagner's Lohengrin at Bayreuth. There are similarities between the two productions. Both feature sleek, white-walled sets reminiscent of a laboratory, and both stagings are supported by choruses weirdly costumed in unexpected ways and richly directed in a manner that integrates the ensemble with the dramatic setting. Lastly, a sparseness pervades Mr. von der Thannen's settings, which he is quick to populate with colorful intellectual incongruities, like little houses on wheels and gigantic lilies. This is the kind of Regietheatre that does not offend, but which titillates the viewer's fancy, and causes smiles, not growls. It can become highly popular and habit forming. Unlike the audiences at Bayreuth, who at times behave like carnivores waiting to devour a director's new production, this premiere received no audible boos during the curtain calls. 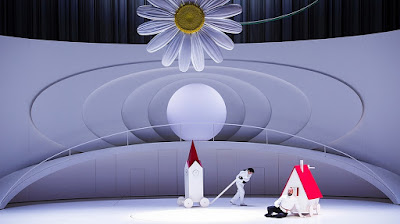 Perhaps the first rate cast assembled had a lot to do with this reception. As is usually the case during the summers at Salzburg, all the performers were quite excellent. In the title role, the young Polish tenor Piotr Beczala was in marvelous voice, his ringing high C in "Salut! demeure chaste et pure" thrilling and secure.  Italian soprano Maria Agresta superbly conveyed the extremes that her role demands:  young innocence and shattering tragedy. Ildar Abdrazokov's Méphistophélès was a dashing figure who commanded the stage at all times.  Perhaps not the basso profundo voice that we are accustomed to hearing in this role, he was lyrical and ample of voice. Alexey Markov as Valentin seemed at times overwhelmed by the production, although he sang firmly throughout most of the performance.

What can one say about the Vienna Philharmonic that has not been stated so many times before. They played with the kind of expert musicianship that makes them one of the world's great ensembles. The young Argentinian conductor Alejo Pérez led them in a passionate reading of a score that many times can sound overly familiar and trite.

Despite its idiosyncrasies this is a production that needs to be seen live to be fully appreciated. That was certainly the case with the Bayreuth Lohengrin for which Mr. von der Thannen designed sets and costumes. I first experienced it through photographs, then on Blu-ray; but the concept did not hit home until I saw it live at Bayreuth in 2012. I hope that other opera houses pick up this staging after its initial Salzburg run.
Posted by Vincent Vargas at 10:12 AM