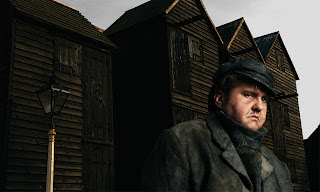 Random bit of news before my review: I sat down next to the puppet handlers and the fellow who plays Martin Luther King from the upcoming production of Satyagraha. They are here from London rehearsing the production at the MET and decided to spend an evening attending an opera after spending the whole day rehearsing for another opera. They were surprise to be sitting down next to someone that had seen their production in London last April at the English National Opera. We talked about Glass and Britten. It was fun! They are nice people: go see Satyagraha when it opens here!

Now on to Peter Grimes:

Many of us in New York City know this seminal 20th century masterpiece by Benjamin Britten from the great production conceived and directed by Tyrone Guthrie. It was a superb staging made complete by the titanic performance of Jon Vickers, who was simply unforgettable in this role.

John Doyle, who has directed unusual stagings of Sweeney Todd and Company for Broadway, has turned this opera inside out. Instead of using the sea as the work's focal point, as the composer intended, his interest is in showing us the craggy facades of wooden sheds in an English fishing town. Here, villagers do not open the doors and windows to let the sunlight and fresh sea air in, but instead spy on each other, and stand in judgment of the village oddball, Peter Grimes. Needless to say, the results are rustic and monotonous, and the audience easily tires of the same drab look throughout the entire evening. When in the last scene the set parts to reveal a radiant sky, the effect is only predictably marvelous (what do you expect after spending an entire evening looking at wooden sheds?) Perhaps this was Mr. Doyle's intention: to lead the audience towards visual salvation by guiding them through a journey of suffering. This being Holy Week, I can totally understand and appreciate Mr. Doyle's trajectory, but I think here it is a bit much.

And what about the Sea Interludes -- the beating heart of this marvelous score -- do you stage them or not? I am sure that every director agonizes over this decision. Here. Mr. Doyle opted not to stage them, and instead treats us to long views of the same drab wooden sheds.

Of course, the director and his design team will argue that the audience need not see the sea, or even feel that we are close to the seashore because Benjamin Britten's music evokes it better than they could ever achieve. I'll go along with that, but I am sure that Mr. Britten wouldn't have minded a little scenic color in this production to go along with his marvelous tone color in his amazing score.

Anthony Dean Griffey sang the title role with style and passion. His lyric tenor offers a total contrast to the great men of the past who made this role legendary: Peter Pears, for whom the part was written, and Jon Vickers, who for many years was the MET's house Grimes. But Mr. Griffey is a fine singing actor, and he will grow in this part, and as the years pass and his voice deepens, if he continues to sing this role, his interpretation will gain even more gravitas.

Wonderful in this cast were Anthony Michaels Moore as a younger than usual Balstrode, and John Del Carlo as a giant sized Swallow. Patricia Racette sang a memorable Ellen Orford, Grimes's lady friend, and his only hope, if they marry, for one day to be accepted by the villagers.

Donald Runnicles and the Metropolitan Opera Orchestra were one. His reading was clear, detailed and powerful. During the last scene I vividly heard and saw the waves breaking during the last measures of the last scene. Of course, the sea was there all the time, but the waters were hidden somewhere behind the wooden sheds. With them out of the way, Benjamin Britten's imagery came through loud and clear.
Posted by Vincent Vargas at 11:31 PM