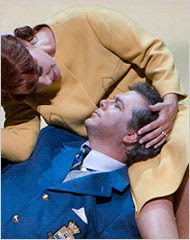 This season's MET revival of Tristan und Isolde has not only been filled with drama, but it has made us all painfully aware of the dearth of capable heldentenors in our time who can successfully tackle Wagnerian roles. Once Ben Heppner made the decision not to sing due to his failing health, the MET had to scramble to fill the role. It was reported to me that his cover, John Mac Master, lost his voice during the March 10 performance. It was further made known to me that at the next performance another tenor, Gary Lehman, was the replacement and managed to sing well, but Deborah Voigt suffered some kind of stomach problem and had to be replaced.

Then last night the unthinkable happened: Gary Lehman, who was back and apparenly singing well, suffered an accident onstage. At the start of Act III, during the English horn prelude, the contraption that slowly carries the tenor downward from upstage snapped, and Lehman slid down, like a toboggan, head first, into the prompter's box. Pandemonium! Levine stopped the orchestra, people rushed onstage to help him up. Minutes later, Peter Gelb came out to say that Mr. Lehman was all right, and that he would continue the performance after a few minutes, and a chance to drink some water. The rest of the performance continued without any further technical problems, although, vocally, the performance was not one for the ages.

The rumor is that Robert Dean Smith will take over the role. Mr. Smith sang Tristan in the latest production of this work at Bayreuth in 2005 alongside Nina Stemme, who received great ovations for her work. The production, which seemed to take place on a dilapidated cruise liner, was universally hated, and Mr. Smith received mixed reviews.

You can hear a preview of Robert Dean Smith's Tristan on my podcast of the 2005 Bayreuth production. It can be downloaded by clicking here.

I can't wait to see what happens on Saturday!
Posted by Vincent Vargas at 2:44 PM